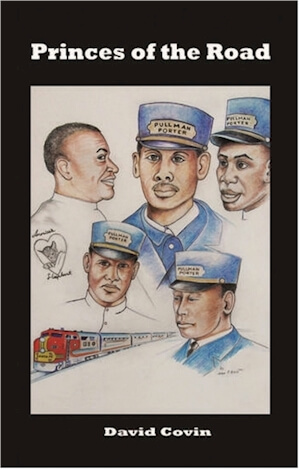 Princes Of The Road
by David Covin

Read Our Review of Princes Of The Road

Princes of the Road is centered around the lives of members of The Brotherhood of Sleeping Car Porters, the Pullman Porters. Most of its action takes place during the years 1938 - 40. By focusing on a limited number of porters (despite a cast of almost 90 characters, both fictional and historical), the novel explores the inner lives of the porters, their myriad personal strengths and failures, their common efforts, struggles with each other and the Pullman company, the penetration of every aspect of their lives by the effects of race, and the horrors - both domestic and foreign - endemic in those middle years of the 20th century.

Using trains as both metaphors and dramatic instruments of transportation, it traverses the whole country, from the big cities to the smallest hamlets, North and South, East and West, from the Rockies to the Gulf Coast, from New England to the beaches of Southern California, and into the railroad hub of Chicago, home of the Pullman Company. By entering the lives of individual porters, it exposes the reader to how such historical figures as Father Divine, A. Philip Randolph, Eleanor Roosevelt, and Madame C.J. Walker got there, too, making substantive impacts both on how they lived, and how they understood themselves. Princes of the Road is a historical novel which does not seek to evade, cloak, or minimize the horrors that much of the country s history has visited upon the least of these. It does this, as the poet Eugene Redmond has said of it, with rich storytelling, and memorably drawn lives, times, and rhymes that hold us like a spell.