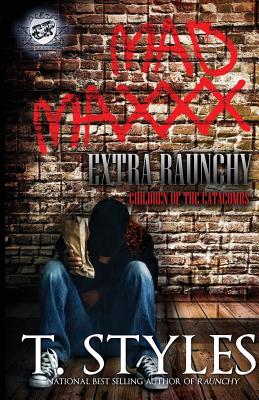 Mad MaXXX: Children of The Catacombs
by T. Styles

Paperback Description:
What do you get when you put a group of vagrants, alcoholics, drug addicts, murderers and troubled teenagers, in a dark tunnel alone? T. Styles’ next twisted novel, Mad MaXXX: Children of The Catacombs! After being blamed for a crime she didn’t commit, Madjesty (from the RAUNCHY series) retreats to The Catacombs, a tunnel nicknamed by the homeless who live there. Although the conditions are less than habitable, she discovers some painful things about herself, through the eyes of people more tormented than she is. Despite the rats, public sex exploitations, violence and the mystery of never really knowing the people around you, Madjesty is the most comfortable she’s ever been in her life. With them she feels right at home. Until Everest comes into the picture, with her tall tales that only Madjesty doesn’t buy. Although it’s obvious to others around Madjesty, that she may be falling in love, she avoids it at all cost. After all, every female she has ever cared for was murdered or violently ripped from her life, twisting her mind up in the process. Even though she avoids the affections of Everest, she finds love anyway in a 5-year old named Pickles, who was born in The Catacombs and abandoned by his mother soon after. Before long Madjesty appears to be getting her life together, but there is one problem, Wicked, the power-hungry self-proclaimed leader, doesn’t want her there. He’s doing everything he can to have her removed from the Catacombs, even if it means taking her life. Mad MaXXX is a look into the mind of T. Styles, and readers are in for an original ride never seen before in urban fiction. Strap in your seat belt and enjoy!

Books similiar to Mad MaXXX: Children of The Catacombs may be found in the categories below: