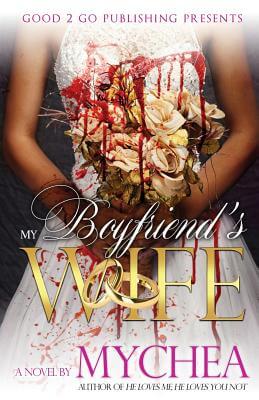 My Boyfriend’s Wife
by Mychea

Paperback Description:
Trust no man. Every action has a reaction and sometimes that reaction is… Death Lust, Lies and Betrayal Scarred by the one you love… Ananda is on her way to the top. A frail heart and mistrust of men once took her soul to the bottom. Her sassy personality is how she forges her way through in life and remains in control. Until she meets the man, most women’s dreams are made of. Ananda can’t believe she’ll finally get a happily ever after…. Until a tawdry secret reveal splits her world in two and forces Ananda to realize that dreams are for children and she is a grown woman now. Ananda struggles to contain her raging emotions but lack of judgment, a feisty attitude and her ride or die friend Tracey that is always down with the get down; keeps everyone on their toes and Ananda is on the warpath to let everyone know that there will be hell to pay for anyone who steps in her path. Along comes Malcolm… Malcolm is an entertainment manager that knows he has hit the jackpot when he meets a sexy, sassy woman named Ananda. Doing what it takes to propel her career and turn her into the next big international supermodel, Malcolm finds himself caught up in a whirlwind of endless sex, cultivating companionship and a lucrative contract for his client. All is well until a secret Malcolm had hoped to contain is revealed and all hell breaks loose to the point he questions if his life is in danger. In another world and another time maybe happily ever after does exist, but in this star crossed lover’s world the secrets that are kept in the dark come to light and threaten every life that it touches. Journey once again with Mychea as she takes readers on an emotional roller coaster ride as they seek meaning to what this love game is all about and how being careless with matters of the heart can be deadly….

More books like My Boyfriend’s Wife may be found by selecting the categories below: