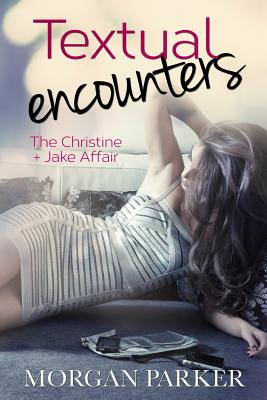 Textual Encounters: The Christine and Jake Affair
by Morgan Parker

Paperback Description:
Katie discovers an unlocked iPhone in the back seat of a taxi. But instead of turning it in to the driver as lost, she decides to keep it for herself. Outside of the usual clutter you would expect to find on a smartphone, what captures Katie’s interest is the single conversation she finds on the phone’s secure text messaging service, a three-month dialogue between a woman with an uncertain past named Christine and a single, eligible man named Jake. >From Strangers to Soulmates in 90 Days What starts out as a message intended for someone else ends up being the beginning of a relationship more powerful than anything Christine or Jake have ever experienced. But nothing ever turns out to be as good as it initially seems and their histories slowly reveal details and past lovers that threaten to derail their humble quest for love. >Forgotten In The Back Seat of a New York City Taxi Can Christine and Jake overcome the seemingly insurmountable obstacles, doubts and secrets that endanger their love? If so, why would such a relationship get forgotten in the back seat of a New York City taxi? >Presented in a Format Unlike Any Other You Will Find Follow Katie as she reads through the 3 months of conversations that form The Christine + Jake Affair and provide the foundation for the Textual Encounters Trilogy.

More books like Textual Encounters: The Christine and Jake Affair may be found by selecting the categories below: