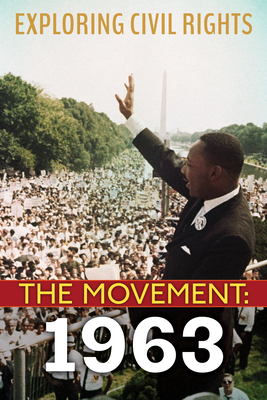 Hardcover Description:
Key events of the Civil Rights Movement will be brought to life in this exciting and informative new series.The year 1963 brought both violence and a speech that resonates today. In June, two Black students were blocked from registering for classes at the University of Alabama. Civil rights leaders responded with a historic protest. In August, 250,000 people gathered for the March on Washington as Dr. Martin Luther King Jr. delivered his "I Have a Dream" speech. The following month, a bomb planted by the Ku Klux Klan killed four girls at a church in Alabama. The extent of racism and discrimination was finally laid bare, as public sentiment for the movement swelled and change now seemed inevitable.The years from 1955 to 1965 are at the heart of the civil rights movement—from the Montgomery bus boycott to the Voting Rights Act. The contributions of key activists, including Rosa Parks, Dr. Martin Luther King Jr., John Lewis, Barbara Nash, and Malcolm X, are part of the narrative. Demonstrations of passive resistance and legal challenges were often met with bloodshed and violence against Black Americans fighting to end segregation and discrimination. Yet the courage of those yearning for equal opportunities under the law ultimately produced legislation affirming that every American should have the same constitutional rights, regardless of color, race, or gender. Key features: - Each book addresses major moments in civil rights history, organized chronologically, ties into the school curriculum - Sidebars, at least one per chapter (mix of cultural references and explanations of more complex terms) - Back matter: timeline, glossary, reference materials, mini-bio of a modern civil rights activist, and more- Brand new series design, historical photos throughout - Opportunities for series expansion (pre & post-civil rights)

Books similiar to Exploring Civil Rights: The Movement: 1963 (Library Edition) (Library) may be found in the categories below: