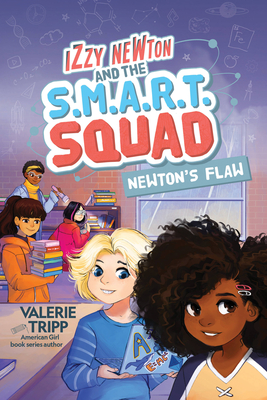 Hardcover Description:When middle-school mishaps happen, five friends form the S.M.A.R.T. Squad and use their collective skills and the power of STEM to bring order to their school. Join Izzy Newton in the second adventure of this fun new fiction series, where science reigns supreme. With their first mystery solved and first-day jitters triumphantly behind them, Izzy and her pals—the Solving Mysteries and Revealing Truths Squad—start to settle in to the normal day-to-day at Atom Middle School. Izzy even works up the courage to try out for an all-boys sports team! Things are going well until a mysterious illness threatens to shut down the media center—and maybe the entire school. The S.M.A.R.T. Squad is on the case in a race to figure out what ails them. But that’s not all. A pop-up science fair causes excitement and tension for the Squad. And Izzy’s failure to speak up in her speech class feels like an obstacle she can’t overcome. Can the girls pull together to solve the media center mystery? Will their STEM smarts help them rock the science fair? Or will Izzy Newton’s flaws mean the end of the S.M.A.R.T. Squad? Plus, learn more about the real science behind the fiction and meet some amazing real-life scientists.


Praise for the series:
It’s one thing to have children’s books about scientists or podcasts or stories about strong women in STEM, but it’s another world entirely when your children get to feel represented by the characters they’re reading about. -Romper

More books like Izzy Newton and the S.M.A.R.T. Squad: Newton’s Flaw (Book 2) may be found by selecting the categories below: