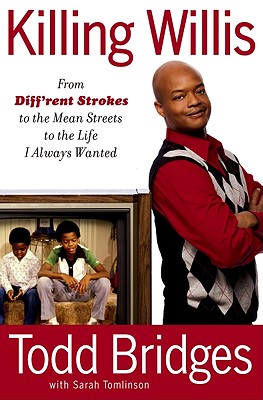 Killing Willis: From Diff’rent Strokes To The Mean Streets To The Life I Always Wanted
by Todd Bridges

Read Our Review of Killing Willis: From Diff’rent Strokes To The Mean Streets To The Life I Always Wanted

Hardcover Description:
The former child star—best known as Willis Jackson on Diff’rent Strokes—shares the shocking but inspirational details of his struggles with addiction, brushes with the law, and fierce fight to carve a path through the darkness and find his true identity.

For Todd Bridges early stardom was no protection from painful childhood events that paved the road to his own personal hell. One of the first African-American child actors on shows like Little House on the Prairie, The Waltons, and Roots, Bridges burst to the national forefront on the hit sitcom Diff’rent Strokes as the subject of the popular catchphrase, "What’chu Talkin About Willis?" When the show ended, Bridges was overwhelmed by the off-camera traumas he had faced. Turning to drugs as an escape, he soon lost control.

Now, for the first time, Bridges opens up about his life before and after Diff’rent Strokes: the incredible reversals of fortune brought on by fame and the precipitous—and very public—descent that followed; the persecution from police; the drug addiction that nearly consumed him; the criminal charges that almost earned him a life sentence; and his successful legal defense led by Johnnie Cochran. Through it all, Bridges never relented in his quest to fight his way back from the abyss, establish his own identity—separate from Willis Jackson—and offer his ordeal as a positive example for those struggling to overcome similar challenges. His triumphant story of recovery and redemption is recounted here as well.

Todd Bridges has lived a life of remarkable twists and turns—from the greatest heights to the lowest lows imaginable. In this shocking but ultimately hopeful memoir, he proves that what he was really talking about was survival.

More books like Killing Willis: From Diff’rent Strokes To The Mean Streets To The Life I Always Wanted may be found by selecting the categories below: