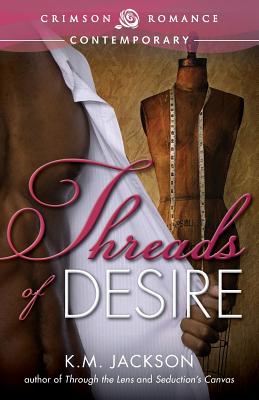 Threads of Desire
by K.M. Jackson

Sexy fashionista Gabrielle Russell has been challenging Nick Ross most of his life and now is no exception. A top financial analyst, Nick has been dating his boss’s daughter and he’s on the fast track to turning his five-year marathon into a three-year sprint. But life throws him a curve when he finds his perfect girlfriend curled up in a very un-zen like position with her yoga instructor. Faced with this awkward downward dog, Nick heads to the only place he can think of - his brother Steve’s place - only to be stuck face to hips, thighs, lips, just about everything with his roommate, Gabby. She’s the habit Nick just can’t shake. The one that got away and she won’t let him forget it.

Gabrielle is frustrated. She’s been banging it out for years as a curvy girl trying to make her creative mark on the exclusive world of New York fashion and she’s hit a brick wall both personally and professionally. Now stuck in a dead end job designing jersey pantsuits for wannabe mafia wives while dodging the advances of her boss’s son, she doesn’t know how to get out of the hole she’s dug for herself. At least she has a bit of peace in the small apartment she shares with her childhood friend and roommate, Steve.

Or she did until Nick Ross - Mr. Perfection and her own devastation, the one who broke her heart and almost broke her spirit - walked in. And now he’s back and looking for a place to camp out while he gets his life back on track. Well, she’s got news for him: She’s not the same girl she was all those years ago when just a look would send her heart stuttering. Okay, maybe she is, but now maybe it’s time the tables were turned on the unflappable Nick Ross.

More books like Threads of Desire may be found by selecting the categories below: