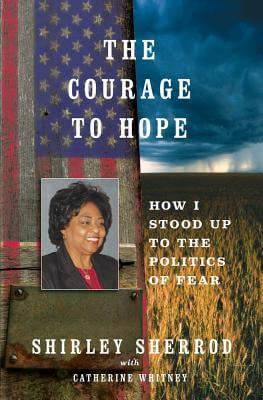 The Courage To Hope: How I Stood Up To The Politics Of Fear
by Shirley Sherrod

Read Our Review of The Courage To Hope: How I Stood Up To The Politics Of Fear

Hardcover Description:
In the summer of 2010, Shirley Sherrod was catapulted into a media storm that blew apart her life and her job doing what she’d done for decades: helping poor, hardworking people live the American dream. She was a lifelong activist who served as Georgia’s first black director of rural development.

A right-wing blogger, the now late Andrew Breitbart, disseminated a video clip of a speech Sherrod had given to the Georgia NAACP, intending to make her an example of “reverse racism.” The right-wing media ramped up the outrage, and before Sherrod had a chance to defend herself, the Obama administration demanded her resignation. Then, after hearing from Sherrod herself and learning the entire truth of what she said in that speech, the administration tried to backtrack. As public officials and media professionals admitted to being duped and apologized for their rush to judgment, Sherrod found herself the subject of a teachable moment.

The Courage to Hope addresses this regret-table episode in American politics, but it also tells Sherrod’s own story of growing up on a farm in southwest Georgia during the final violent years of Jim Crow. As a child she dreamed of leaving the South, but when her father was murdered by a white neighbor who was never brought to justice, Sherrod made a vow to stay in Georgia and commit herself to the cause of truth and racial healing. With her husband, Charles, a legend in the civil rights movement, she has devoted her life to empowering poor people and rural communities—Americans who are most in need.

The incident that brought Sherrod into the spotlight does not define her life and work, but it strengthens her commitment to stand against the politics of fear and have the courage to hope.

More books like The Courage To Hope: How I Stood Up To The Politics Of Fear may be found by selecting the categories below: