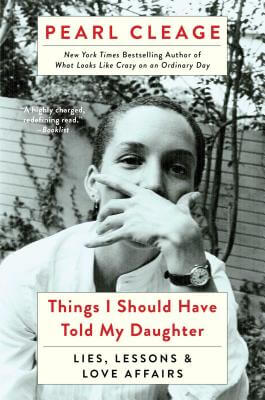 Things I Should Have Told My Daughter
by Pearl Cleage

Read Our Review of Things I Should Have Told My Daughter

In addition to being one of the most popular living playwrights in America, Pearl Cleage is a bestselling author with an Oprah Book Club pick and multiple awards to her credit, but there was a time when such stellar success seemed like a dream. In this revelatory and deeply personal work, Cleage takes readers back to the 1970’s and ’80’s, retracing her struggles to hone her craft amid personal and professional tumult.

Though born and raised in Detroit, it was in Atlanta that Cleage encountered the forces that would most shape her experience. At the time, married to Michael Lomax, now head of the United Negro College Fund, she worked with Maynard Jackson, Atlanta’s first African-American mayor. Things I Should Have Told My Daughter charts not only the political fights but also the pull she began to feel on her own passions—a pull that led her away from Lomax as she grappled with ideas of feminism and self-fulfillment. This fascinating memoir follows her journey from a columnist for a local weekly to a playwright and Hollywood scriptwriter whose circle came to include luminaries Richard Pryor, Avery Brooks, Phylicia Rashad, Shirley Franklin, and Jesse Jackson.

In the tradition of giants such as Susan Sontag, Joan Didion, Nora Ephron, and Maya Angelou, Cleage’s self-portrait raises women’s confessional writing to the level of fine literature.

More books like Things I Should Have Told My Daughter may be found by selecting the categories below: