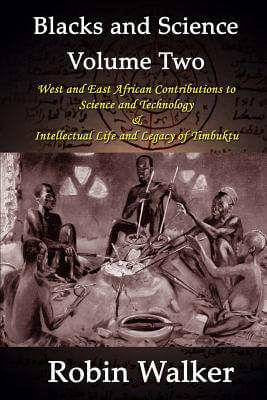 Blacks And Science Volume Two: West And East African Contributions To Science And Technology And Intellectual Life And Legacy Of Timbuktu
by Robin Walker

Book Description:
Blacks and Science Volume Two Did YOU know any of the following facts? o The Bamoun Kingdom, now in today’s Cameroon, has 7,000 surviving manuscripts in their own script o Timbuktu astronomers used the cosine, tangent, cotangent, secant and cosecant functions of trigonometry o The Dogon of Mali had an early and wholly indigenous notion of big bang’ derived from a singularity o A number of iron and copper tools were excavated in Senegal that dated from 2800 BC o The total amount of gold mined in the desert regions of West Africa to the year 1500 was $35 billion at 1998 gold prices o A surviving sixteenth century Timbuktu manuscript has a formula for making toothpaste and adds that regular brushing of your teeth removes bad breath o A 1342 text published in Cairo mentions two royal Malian voyages sailing across the Atlantic involving hundreds of vessels o The Royal Palace of the Ashanti Empire contained a suite of apartments on its upper floor that reminded a visitor to the palace of Wardour Street in Central London o Glass was manufactured at the Yoruba capital of Ile-Ife in the sixth century o According to New Scientist, there are even surviving Timbuktu manuscripts that deal with climatology Blacks and Science Volume Two is largely a synthesis of previously published Kindle e-books or lecture-essays West African Contributions to Science and Technology combined with Intellectual Life and Legacy of Timbuktu. However, new information not present in either e-book has been added on East Africa. This book is a general introduction to the role played by the West and East Africans in the evolution of Mathematics, Astronomy & Physics, Metallurgy, Medicine & Surgery, Boat Building & Navigation, Architecture, and Crafts & Industry. It also discusses the content, importance and implications of the recently rediscovered manuscripts of Timbuktu.

More books like Blacks And Science Volume Two: West And East African Contributions To Science And Technology And Intellectual Life And Legacy Of Timbuktu may be found by selecting the categories below: