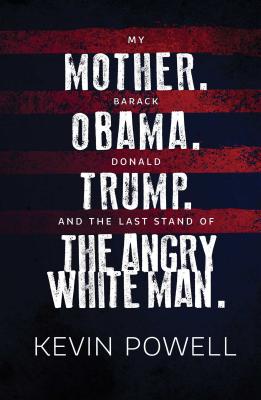 My Mother. Barack Obama. Donald Trump. And the Last Stand of the Angry White Man.: An Autobiography of America
by Kevin Powell

Book Description:
Written in the spirit of Joan Didion’s essay Notes from a Native Daughter and James Baldwin’s The Fire Next Time, a revelatory look at today’s America from writer and activist Kevin Powell as told through an examination of three crucial figures in his life: his mother, Barack Obama, and Donald Trump.

Coinciding with the tenth anniversary of Barack Obama’s first presidential victory, Powell also reflects on the legacy of the forty-forth President and his evolution from a revered figure to a hotly debated and polarizing leader by people of all backgrounds. Finally, drawing on his experience touring the South as an activist and public speaker, Powell observes the dynamic rise of President Donald Trump’s popularity and the cultural influence of his supporters.

During this time of confusion, in a nation that’s divided like never before but continues to become more and more diverse than ever, Powell addresses the urgent conversation about race, class, and identity with keenness and compassion.

More books like My Mother. Barack Obama. Donald Trump. And the Last Stand of the Angry White Man.: An Autobiography of America may be found by selecting the categories below:

Tell us what do you think about My Mother. Barack Obama. Donald Trump. And the Last Stand of the Angry White Man.: An Autobiography of America.