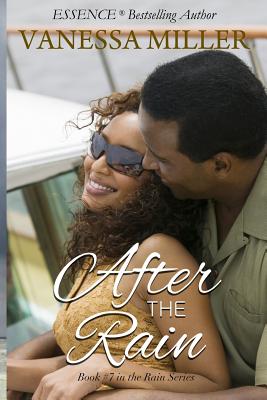 After the Rain (Rain Series) (Volume 7)
by Vanessa Miller

Book Description: Isaac Walker is back with a vengeance. As old enemies from his past resurface Isaac desperately tries to hold onto his faith in God’s ability to fight his battles. Nina and Isaac raised their youngest son, Isaac Walker Junior (Ikee) as far away from the hood and drug life as they could get him. But the sins of the father were too strong and too deadly for the son to avoid. Once Ikee leaves the church to become a gang banger Isaac is pulled back into a life he left behind so long ago and only God knows how this nightmare will end. Bonus Read... Rain For Christmas Five years ago, Donavan lost the love of his life, but this Christmas he just may get it back. The golden boy, Donavan Walker, was destined to take over for his father, Isaac Walker in the family business preaching the gospel or so his family thought. But when Isaac catches his son with the church secretary, Donavan leaves the ministry. He sets out on his own and becomes financially successful, but this Christmas he will discover, that money don’t mean a thing without your first love. Diana Milner fell for Donavan from the moment she spilled coffee on him. But mistakes from her past doomed their relationship from the start. She dreams of a second chance, but now she has other responsibilities. The courts just awarded her custody of her four year old niece. Amarri deserves two parents to love and care for her. The moment Donavan meets Amarri, it seems that the little girl has stolen his heart. But Diana, wants to know if his heart still beats for her as well. Join me on this journey of Christmas wonder with your favorite characters from the Rain series. Rain for Christmas is a novella. I hope you enjoy and have a very Merry Christmas

More books like After the Rain (Rain Series) (Volume 7) may be found by selecting the categories below: