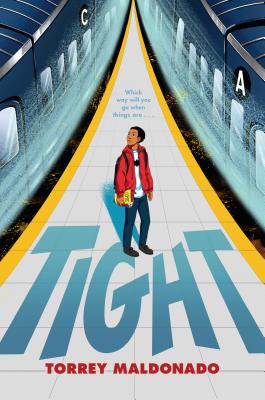 Book Description:
Tight: Lately, Bryan’s been feeling it in all kinds of ways . . . Bryan knows what’s tight for him—reading comics, drawing superheroes, and hanging out with no drama. But drama is every day where he’s from, and that gets him tight, wound up. And now Bryan’s friend Mike pressures him with ideas of fun that are crazy risky. At first, it’s a rush following Mike, hopping turnstiles, subway surfing, and getting into all kinds of trouble. But Bryan never really feels right acting so wrong, and drama really isn’t him. So which way will he go, especially when his dad tells him it’s better to be hard and feared than liked? But if there’s one thing Bryan’s gotten from his comic heroes, it’s that he has power—to stand up for what he feels . . . Torrey Maldonado delivers a fast-paced, insightful, dynamic story capturing urban community life. Readers will connect with Bryan’s journey as he navigates a tough world with a heartfelt desire for a different life.

More books like Tight may be found by selecting the categories below: