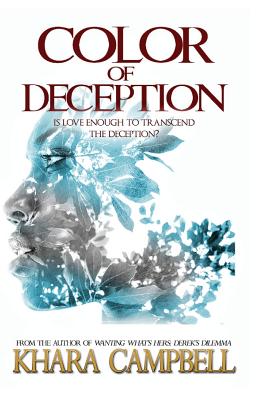 Color of Deception
by Khara Campbell

Book Description:
Grief strikes everyone differently, for Pete it struck him to the core. After his beloved wife Moriah was tragically killed in a car accident, the driver and his entire ethnicity become the target of Pete’s wrath. When Pete buried his wife, all love, compassion, empathy, joy, he ever possessed, was buried along with her. Family tries to bring him out of his grief, but his stubbornness allows it to keep a chokehold on his life. Carlisha, the young black, orphaned woman that Moriah had welcomed into her heart and their home as a part of their family, is now a bullseye for Pete’s grief. But despite his now callous attitude toward her, Carlisha still sees Pete as the man that once was a father figure in her life. Tragedy strikes yet again, and a budding romance and a series of deceptions leave Pete questioning the target of his wrath. Soon Carlisha is forced to accept her life as an orphan yet again after the man she loves turns his back on her when she needs him the most. And love Pete never thought would resonate in his heart again blossoms in more ways than one as he fights for someone that represents the very race that he has come to hate.

More books like Color of Deception may be found by selecting the categories below: