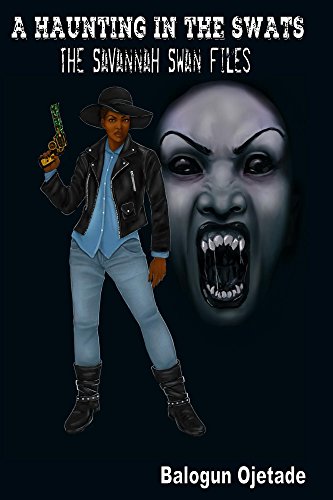 A Haunting in the SWATS (The Savannah Swan Files, Volume 1)
by Balogun Ojetade

Book Description:
Hoodoo. Ritual Murders. Ancient Secrets. Welcome to the SWATS! Savannah Swan is the Root Woman, charged with enforcing the Road Law in Atlanta. Walk the wrong road and Savannah’s justice will be swift and deadly. Beneath the southern hospitality of Atlanta rests a dangerous world where shifters, demons, witches and gods, old and new, all vie for power. And Southwest Atlanta known as the SWATS is the most dangerous area. For generations, the Root Woman given great power, both mundane and arcane, by the mayor has protected the SWATS, but now a wave of ritual child murders has struck the city and corpses are appearing with strange occult symbols etched into their flesh. Something ancient, powerful and malevolent is behind it all, threatening to destroy the city and Savannah’s family; a family that might just break the Road Law to save themselves, Savannah and the SWATS. A HAUNTING IN THE SWATS is the first novel in the Dark Urban Fantasy SAVANNAH SWAN FILES series. If you like action packed supernatural thrillers brimming with magic, spine-chilling horror and otherworldly monsters then you will love these books!

More books like A Haunting in the SWATS (The Savannah Swan Files, Volume 1) may be found by selecting the categories below: