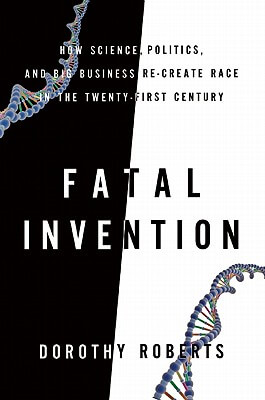 Read Our Review of Fatal Invention: How Science, Politics, And Big Business Re-Create Race In The Twenty-First Century

Hardcover Description:
A decade after the Human Genome Project proved that human beings are not naturally divided by race, the emerging fields of personalized medicine, reproductive technologies, genetic genealogy, and DNA databanks are attempting to resuscitate race as a biological category written in our genes. In this provocative analysis, leading legal scholar and social critic Dorothy Roberts argues that America is once again at the brink of a virulent outbreak of classifying population by race. By searching for differences at the molecular level, a new race-based science is obscuring racism in our society and legitimizing state brutality against communities of color at a time when America claims to be post-racial.

Moving from an account of the evolution of race—proving that it has always been a mutable and socially defined political division supported by mainstream science—Roberts delves deep into the current debates, interrogating the newest science and biotechnology, interviewing its researchers, and exposing the political consequences obscured by the focus on genetic difference. Fatal Invention is a provocative call for us to affirm our common humanity.

More books like Fatal Invention: How Science, Politics, And Big Business Re-Create Race In The Twenty-First Century may be found by selecting the categories below: