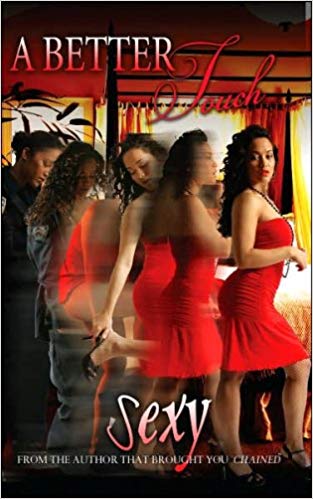 A Better Touch
by Deborah Cardona a.k.a “Sexy”

Book Description:
Meet Deja Padilla a dazzling young mother of two who becomes a Corrections Officer for the state of New York for one reason and one reason only. It wasn’t to get away from the abusive husand who knocked her around from time to time. It wasn’t for the two daughters who she claimed she wanted to give a better life to. And it wasn’t for the job she pledges to do to the best of her ability. Deja becomes a Corrections Officer to fulfill one of her greatest fantasies. Becoming a New York’s most dedicated madams. Recruiting six young women who are fresh out of the P-Nile was the hard part, with the help of two she/hes,she is able to open up a place of pleasure named Butterflies which she uses as a front. It is an art to sell your goodies for funds a task Deja puts her all into. But is she ready for the challenges this position will bring her way. Find out how Deja places her ladies in the hands of many officals who will eventually become not only their johns but their worst nightmares. Join Deja on a roller coaster ride of pleasure and betrayal. Every woman dreams of a life of mystery. Now is your chance to see it through her eyes.

Tell us what do you think about A Better Touch.