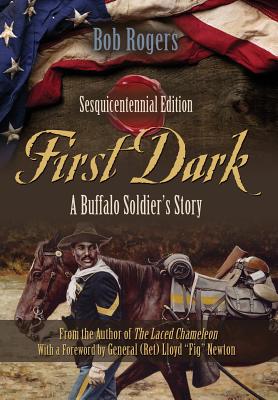 Hardcover Description:
First Dark is a coming-of-age story, an epic adventure, and a compelling examination of the primary feelings that drive human nature hate, hope, desire, love, loss, grief, revenge, and forgiveness as seen by Apache, black, Mexican, and white young adults during and shortly after America’s Uncivil War.

The San Francisco Review described Bob Rogers as a rising author who takes readers back to life and times in the early years of the Civil War, blending a brilliant mix of historic persons with his fictional characters. Celebrating the sesquicentennial year of the famed Buffalo Soldiers, Bob Rogers delivers his most ambitious work yet a novel that spans their first generation from Charleston and Vicksburg to Appomattox and desert Apache battlefields.

First Dark: A Buffalo Soldier’s Story Sesquicentennial Edition (with a foreword by General (Ret) Lloyd “Fig” Newton) is an historically correct action novel that follows Isaac Rice, the Tenth Cavalry, and the women who love him. His nineteenth century saga begins in Charleston and contributes to the story of how twenty-first century America came to be. Telling Isaac’s story, Rogers surrounds a host of diverse fictional characters with an impressive nonfiction cast, including historic political, military, religious figures, and entrepreneurs of that era.

Subsequent volumes follow Isaac’s descendants, ordinary nineteenth and twentieth century working people, into and out of calamities recessions, panics, droughts, world wars, a depression, natural disasters, and the division of people by race, class, and caste. The view through their eyes serves to enhance twenty-first century readers’ understanding of “how things got this way” in America.

Isaac Rice, a teenager on a South Carolina rice plantation, traveling alone, follows a treacherous waterborne route filled with incredible hardships and danger to escape from slavery. Too young to be a soldier, the Union Army hires him to shovel coal on a gunboat. Thus begins Isaac’s westward journey, in which he encounters storms, stampeding buffalo, and the hate of zealous patriots whose causes are antithetical to the nation he is sworn to defend. Undaunted, he pursues respect and dignity on an odyssey from the middle of the Civil War in South Carolina’s Low Country and the Mississippi Heartland, to the Indian Wars on the Great Plains and deserts of Texas, New Mexico, and Mexico.

Isaac’s is an epic tale of young North Americans coming of age amid the violence of the U.S. Civil War, Indian Wars, Reconstruction, and spillover bloodshed from a Mexican Revolution. Telling Isaac’s story required extensive research of 19th and 20th century books, official documents, and letters, plus multiple visits to relevant geographic locations over a period of twenty years.

A memorable set of characters revolve around Isaac a Confederate guerilla, a black female activist in a Mississippi Constitutional Convention, a Mescalero Apache warrior, a white Union cavalry sergeant, and a Mexican nurse who raise their voices and bare their souls as the world they seek constantly changes, bringing tragedy to their lives and danger for Isaac.

Books similiar to First Dark: A Buffalo Soldier’s Story - Sesquicentennial Edition may be found in the categories below: