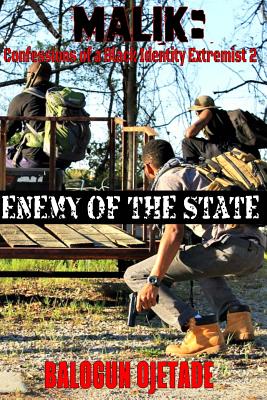 Malik: Confessions of a Black Identity Extremist 2: Enemy of the State
by Balogun Ojetade

Paperback Description:
A riveting new thriller that keeps you on the edge of your seat until the end! Malik Moore and his comrades return, continuing their battle against a broken system and mobs of people so desperate they will do anything to survive in a world gone mad. After what appears to be an EMP fries the entire electrical grid, destroying all electronic and electrical devices cell phones, vehicles, televisions, computers, lights, heat and more Malik, Fay, Dara, Hank and Alaygra decide to take refuge at the family stronghold in Sandy Springs, Georgia they call The Spot, but first, they must survive the sadistic military personnel and law enforcement officers, murderous white supremacists and desperate refugees that now roam the highways and byways of Georgia. Meanwhile, Malik’s friend, Cochise, while traveling east, from Marietta, Georgia, to meet Malik at The Spot, must choose to remain a loner and travel quietly to safety on his own, or risk it all and become a savior to others. MALIK: CONFESSIONS OF A BLACK IDENTITY EXTREMIST 2: ENEMY OF THE STATE is the sequel to MALIK: CONFESSIONS OF A BLACK IDENTITY EXTREMIST by author Balogun Ojetade, and the second installment in the hard hitting, action-packed Confessions of a Black Identity Extremist series.

More books like Malik: Confessions of a Black Identity Extremist 2: Enemy of the State may be found by selecting the categories below: