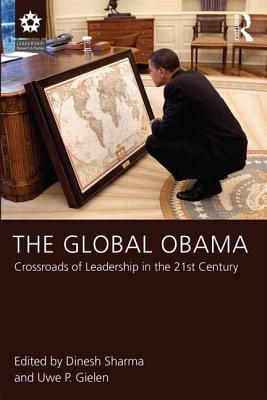 The Global Obama: Crossroads Of Leadership In The 21St Century (Leadership: Research And Practice)
by Dinesh Sharma and Uwe P. Gielen

Read Our Review of The Global Obama: Crossroads Of Leadership In The 21St Century (Leadership: Research And Practice)

Paperback Description:
The Global Obama examines the president’s image in five continents and more than twenty countries. It is the first book to look at Barack Obama’s presidency and analyze how Obama and America are viewed by publics, governments, and political commentators around world. The author of Barack Obama in Hawaii and Indonesia: The Making of a Global President (Top 10 Black History Book) scaled the globe to gather opinions cultural, historical, and political analyses about Obama’s leadership style. Writers, journalists, psychologists, consultants, and social scientists present their views on Obama’s leadership, popularity, and many of the global challenges that still remain unresolved. As a progress report, this is the first book that tries to grasp ‘the Obama phenomenon’ in totality, as perceived by populations around the world with special focus on America’s leadership in the 21st Century.

More books like The Global Obama: Crossroads Of Leadership In The 21St Century (Leadership: Research And Practice) may be found by selecting the categories below: