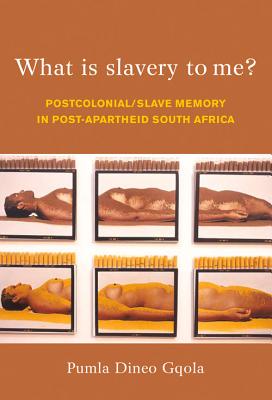 What Is Slavery to Me?: Postcolonial/Slave Memory in Post-apartheid South Africa
by Pumla Dineo Gqola

Book Description:
Much has been made about South Africa’s transition from histories of colonialism, slavery and apartheid. “Memory” features prominently in the country’s reckoning with its pasts. While there has been an outpouring of academic essays, anthologies and other full-length texts which study this transition, most have focused on the Truth and Reconciliation Commission (TRC).What is Slavery to Me? is the first full-length study of slave memory in the South African context, and examines the relevance and effects of slave memory for contemporary negotiations of South African gendered and racialized identities. It draws from feminist, postcolonial and memory studies and is therefore interdisciplinary in approach. It reads memory as one way of processing this past, and interprets a variety of cultural, literary and filmic texts to ascertain the particular experiences in relation to slave pasts being fashioned, processed and disseminated.Much of the material surveyed across disciplines attributes to memory, or “popular history making,” a dialogue between past and present whilst ascribing sense to both the eras and their relationship. In this sense then, memory is active, entailing a personal relationship with the past which acts as mediator of reality on a day to day basis. The projects studies various negotiations of raced and gendered identities in creative and other public spaces in contemporary South Africa, by being particularly attentive to the encoding of consciousness about the country’s slave past.This book extends memory studies in South Africa, provokes new lines of inquiry, and develops new frameworks through which to think about slavery and memory in South Africa.

More books like What Is Slavery to Me?: Postcolonial/Slave Memory in Post-apartheid South Africa may be found by selecting the categories below:

Tell us what do you think about What Is Slavery to Me?: Postcolonial/Slave Memory in Post-apartheid South Africa.