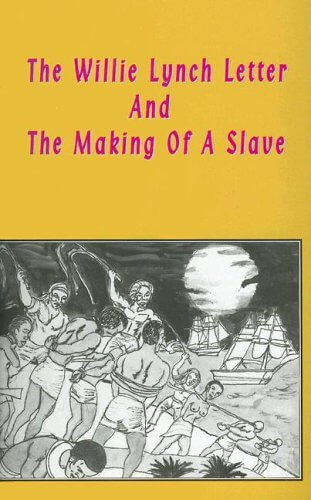 AALBC.com Note: Despite the popularity of this title on our website, the Willie Lynch Letter is a hoax.

The Willie Lynch Letter and the Making of a Slave is a study of slave making. It describes the rationale and the results of Anglo Saxon's ideas and methods of insuring the master/slave relationship. The infamous Willie Lynch letter gives both African and Caucasian students and teachers some insight, concerning the brutal and inhumane psychology behind the African slave trade. The materialistic viewpoint of Southern plantation owners that slaver was a business and the victims of chattel slavery were merely pawns in an economic game of debauchery, cross-breeding, inter-racial rape and mental conditioning of a negroid race, they considered sub-human. Equally important is the international nature of the European economic, political and cultural climate that influenced the slave trade. Within the time scale of African History, it was a relatively short period, a mere one and a half centuries from the most intensive phase of the Atlantic slave trade to the advent of European administration and dominance. Long before that the Slave Coast had been chartered by the Portuguese and the people off the area west of Benin, between the volta River and Lagos, European traders traced a cultural history which linked them with the earliest Yoruba settlements to the north and eastern borders of Africa.

More books like Willie Lynch Letter and the Making of a Slave may be found by selecting the categories below:

Tell us what do you think about Willie Lynch Letter and the Making of a Slave.