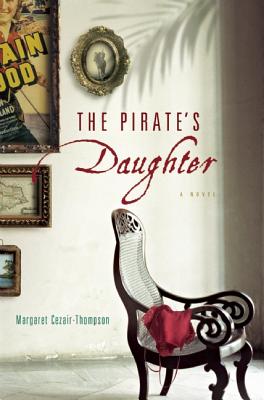 The Pirate’s Daughter
by Margaret Cezair-Thompson

Hardcover Description:
Back in America, little was known of my life in Jamaica,” wrote Errol Flynn.

In 1946, a storm-wrecked boat carrying Hollywood’s most famous swashbuckler shored up on the coast of Jamaica, and the glamorous world of 1940’s Hollywood converged with that of a small West Indian society. After a long and storied career on the silver screen, Errol Flynn spent much of the last years of his life on a small island off of Jamaica, throwing parties and sleeping with increasingly younger teenaged girls. Based on those years, The Pirate’s Daughter is the story of Ida, a local girl who has an affair with Flynn that produces a daughter, May, who meets her father but once.

Spanning two generations of women whose destinies become inextricably linked with the matinee idol’s, this lively novel tells the provocative history of a vanished era, of uncommon kinships, compelling attachments, betrayal and atonement in a paradisal, tropical setting. As adept with Jamaican vernacular as she is at revealing the internal machinations of a fading and bloated matinee idol, Margaret Cezair-Thompson weaves a saga of a mother and daughter finding their way in a nation struggling to rise to the challenge of independence.

More books like The Pirate’s Daughter may be found by selecting the categories below: