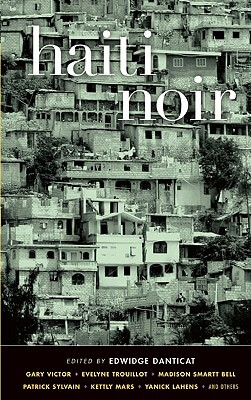 Paperback Description:
"A wide-ranging collection from the beloved but besieged Caribbean island…The 36th entry in Akashic’s Noir series (which ranges from Bronx to Delhi to Twin Cities) is beautifully edited, with a spectrum of voices."
—Kirkus Reviews

"This anthology will give American readers a complex and nuanced portrait of the real Haiti not seen on the evening news and introduce them to some original and wonderful writers."
—Library Journal

"Danticat has succeeded in assembling a group portrait of Haitian culture and resilience that is cause for celebration."
—Publishers Weekly

"A solid contribution to the [noir] series, especially for its showcasing of a setting not commonly portrayed in crime fiction."
—Booklist

"Danticat has put together a collection possessing classic noir elements—crimes and criminals and evil deeds only sometimes punished—but also something else, perhaps uniquely Haitian too."
—Los Angeles Times

"The characters that emerge in the anthology are divergent figures, alienated by exile, thriving in the diaspora and devastated by limited choices. Their stories are multi-layered, thrilling and necessary."
—Ms. Magazine

"Who can ever judge how important Danticat has been to Americans’ understanding and re-evaluating Haiti’s position and role in the hemisphere? Not just as a novelist and essayist in her own right, but as editor and guiding force behind this collection of short stories and the re-publication and English translation of the Chauvet triptych, the Haitian-born Danticat has brought her country’s literature back into the world of English-speakers. Filled with delights and surprises, Haiti Noir, taken as a whole, provides a profound portrait of the country, from its crises to its triumphs, from the tiny bouks of the countryside to the shanties of the sprawling bidonvilles. Danticat herself has a lovely story in the collection, and permits two distinguished foreign writers on Haiti, Madison Smartt Bell and Mark Kurlansky, to slide in there among all the brilliant Haitians."
—Daily Beast

Akashic Books continues its groundbreaking series of original noir anthologies, launched in 2004 with Brooklyn Noir. Each story is set in a distinct neighborhood or location within the city of the book.

From the introduction by Edwidge Danticat:

"I began working on this anthology about a year before January 12, 2010, when Haiti was struck by its worst natural disaster in over two hundred years. The world knows now that more than two hundred thousand people died and over a million lost their homes in Haiti’s capital and the surrounding cities of Léog ne, Petit?Go ve, and Jacmel. As I am writing these words, survivors remain huddled by the thousands in displacement camps, most shielding themselves from intermittent rain with nothing but wooden posts and bedsheets.

I can honestly say that, in spite of the difficult circumstances in Haiti right now, I have never felt a greater sense of joy working on any collective project than I have on this book."

Books similiar to Haiti Noir may be found in the categories below: