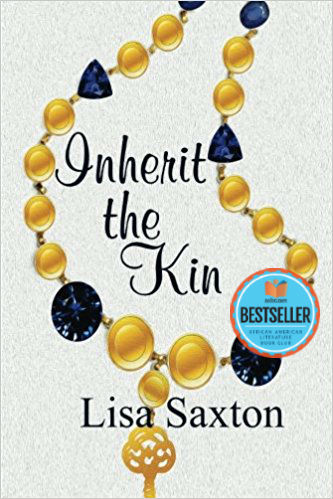 Inherit the Kin
by Lisa Saxton

Kathriyne “Kitt” Robinson suffers from a very special curse. She is doomed by “inescapable lineage.” In less than four weeks, her family’s dubious antics manage to get her arrested. They also spur her on to an adventure she will never forget. As Kitt spends her thirty-fourth birthday in lockup, she reflects on the moment her kin entered her life and changed it forever.

Kitt has spent nearly thirty-four years without getting to know her father’s side of the family tree. Then, after his death, she discovers she s inherited three hilarious great-aunts, an excessively elderly great-grandmother, a duo of snooty cousins, and a handsome step-something who is blessedly not actually related to her. She’s also inherited a mystery!

At least that’s one consequence of the strange reaction Kitt experiences every time she s close to an item originally owned by her ancestor Sophie Jenkins. Sophie, a former slave, built a dynasty from various grifts and cons. She retired a wealthy woman.

Kitt was promised Sophie’s jewel-filled legacy, but the fight for the treasure will turn into a full-on family feud. It will also lead to a larger mystery that could have disastrous consequences for everyone involved!