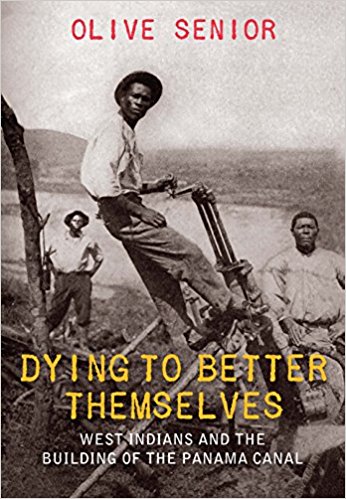 Dying to Better Themselves: West Indians and the Building of the Panama Canal
by Olive Senior

Paperback Description:
The popular West Indian migration narrative often starts with the Windrush Generation in 1950’s England, but in Dying to Better Themselves Olive Senior examines an earlier narrative: that of the neglected post-emancipation generation of the 1850’s who were lured to Panama by the promise of lucrative work and who initiated a pattern of circular migration that would transform the islands economically, socially and politically well into the twentieth century. West Indians provided the bulk of the workforce for the construction of the Panama Railroad and the Panama Canal, and between 1850 and 1914 untold numbers sacrificed their lives, limbs and mental faculties to the Panama projects. Many West Indians remained as settlers, their descendants now citizens of Panama; many returned home with enough of a nest egg to better themselves; and others launched themselves elsewhere in the Americas as work beckoned. Senior tells the compelling story of the West Indian rite of passage of Going to Panama and captures the complexities behind the iconic Colon Man.Drawing on official records, contemporary newspapers, journals and books, songs, sayings, and literature, and the words of the participants themselves, Senior answers the questions as to who went to Panama, how and why; she describes the work they did there, the conditions under which they lived, the impact on their homelands when they returned or on the host societies when they stayed. Many books have shown the conquest of the Isthmus of Panama by land and sea exploring how the myriad individual lives touched by the construction of the railroad and the canal changed the world as well.

More books like Dying to Better Themselves: West Indians and the Building of the Panama Canal may be found by selecting the categories below: