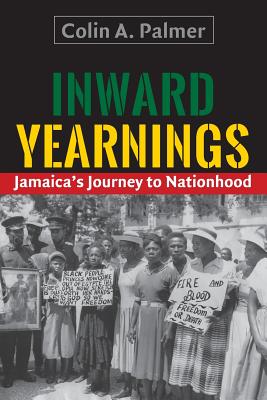 Inward Yearnings: Jamaica’s Journey to Nationhood
by Colin A. Palmer

Paperback Description:
"Inward Yearnings: Jamaica’s Journey to Nationhood is a pioneering case study of an Anglo-Caribbean island’s search for a racial selfhood, its nervous embrace of its African heritage and ultimately a nationalism that reflected those inner longings. These complex and interrelated processes manifested themselves with the founding of the Universal Negro Improvement Association by Marcus Garvey in 1914,the emergence of Rastafarianism and the Back to Africa Movement in the 1930s, the People’s National Party’s adoption of self-government as its goal in 1940, and the appearance of numerous black consciousness groups in the 1950s. The first half of the book excavates the roots of these inner struggles, and their expressions and roles in Jamaica’s society and culture. The second half examines Jamaica’s entry into the West Indies Federation in 1958 and its secession by means of a referendum in 1961. The Colonial Office had convinced the ten federating units that they were all too small to make their individual independence a viable option. The Jamaicans attempted to subsume their nationalism in formation into a larger West Indian nationalism but the process failed. A federal union had been constructed upon a watery foundation. Palmer’s book is a carefully researched history of the federation’s failure and of Jamaica’s decision to affirm its own political identity and selfhood. The book is based largely on manuscript sources located in the British National Archives at Kew Gardens, the Jamaica Archives in Spanish Town and the National Archives of the United States located in College Park. The Jamaican newspaper the Daily Gleaner also constituted an invaluable source." Publisher websit

More books like Inward Yearnings: Jamaica’s Journey to Nationhood may be found by selecting the categories below: