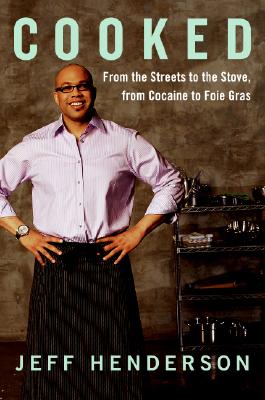 Read a Description of Cooked

’My father left when I was one or two years old. It was just my mother, my sister, Cali Slim, and me living in South Central. I only saw my dad on holidays and the occasional weekend’ I always wanted to be around my father, but I didn't know him like I wanted to.’
’Excerpted from Chapter Two (pg. 13)

No one familiar with the unfortunate first act of Jeff Henderson's life would be surprised to learn that it had led to a long prison term. Abandoned by his father as an infant, he was raised in the projects of South Central L.A. by a hard-working, single-mom who was too consumed by her menial jobs to keep a close eye on her wayward son.

As a consequence, her boy was shaped by negative influences from an early age, and by 13 he was already a juvenile delinquent, stealing from relatives, breaking into houses and stealing bicycles. Kicked out of school less than a year later for robbing a classmate, Jeff started hanging out on the streets full-time, and not even his first arrest at 16 could deter him from a criminal path.

In fact, his felonious behavior only escalated, especially after he became the prot’g’ of a flashy drug dealer. Adopting the alias ’Hard Head,’ Jeff soon found himself seduced by all the flamboyant trappings of the gangsta’ game: loose women, expensive clothes and fast cars. Though he would also become a father at 17 while still virtually a boy himself, he was too busy narcissistically indulging his decadent lifestyle to devote any attention to his young son.

By 21, Jeff had relocated to San Diego where he built his own crack business and purchased a custom-built home, eight automobiles and garish bling including gold necklaces and a Rolex. Before his empire would collapse, Hard Head was raking-in $35,000 a week and was indeed living large during weekend excursions to Vegas and a welcome high roller in Vegas.

Act Two of the Jeff Henderson saga started the day he was fingered by a member of his posse, busted by the feds, and had to trade in his fine threads for an orange jumpsuit with a number on the back. By the time he was convicted, he’d lost everything, and was sentenced to 19 years behind bars on California's infamous Terminal Island.

He could have easily have given up at this juncture by capitulating to the low expectations of a coldhearted correctional system which routinely crushes convicts' spirits while swallowing up their futures whole. But rather than resign himself to diminished prospects, Jeff allowed himself to dream a new dream.

Working his way up from dishwasher to chef in the prison cafeteria, he found the source of the passion which would give him a new lease on life. Along the way, he came to learn every aspect of cooking in a commercial kitchen, and prayed that he would one day get a chance to run his own restaurant. 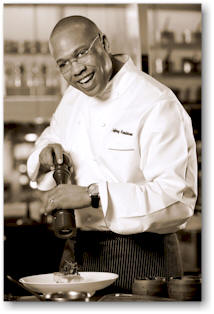 By the time he was paroled after serving about half his sentence, Henderson was ready to prove his worth, provided he could find someone with enough compassion to give an ex-con a second chance. Armed with innovative ideas about blending the soul food from his youth with classic Continental Cuisine, it wasn't long before his sensual creations like cornbread-encrusted lamb chops and cognac-marinated watermelon cubes help him land the big break that he craved.

The fairytale ending as Chef Jeff is chronicled in Cooked: From the Streets to the Stove, from Cocaine to Foie Gras, as moving an overcoming-the-odds memoir as you could ever hope to find. Today, Henderson is the executive chef at the renowned Bellagio Hotel and Casino in Las Vegas, and he's been named Chef of the Year by the Tasting Institute of America.

Fortunate to have found Stacy, a woman he could build a life around, Jeff is also very happily married, and a devoted dad to their three kids. He's cut all ties to his gang-related roots, except for giving back to at-risk youth by offering his services regularly as an inspirational speaker.

Columbia Pictures has already purchased the film rights to Cooked on behalf of Will Smith's Overbrook Entertainment with plans to turn the best-seller into an uplifting bio-pic ala The Pursuit of Happyness. What a postscript for a remarkable role model who stands as a living, breathing testament to the indomitability of the human spirit.