Book Review: Mister And Lady Day: Billie Holiday And The Dog Who Loved Her 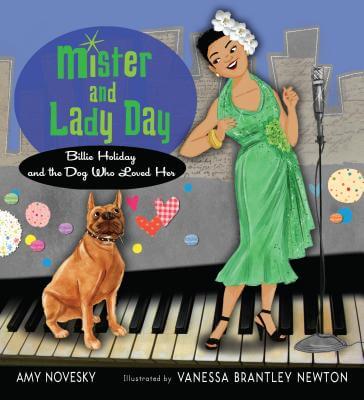 Read a Description of Mister And Lady Day: Billie Holiday And The Dog Who Loved Her

“The great jazz singer Billie Holiday, known as Lady Day, had fame, style, a distinctive singing voice—and lots of dogs. But a boxer named Mister was the dog she loved most.

No matter what, Mister gave Lady Day courage. But would she have enough courage to sing at the grandest venue of her career?
—Excerpted from the inside flyleaf.”

I was somewhat skeptical of the children’s book about Jimi Hendrix published last year, until I read it and was pleasantly surprised by its apropos storyline. Since the self-destructive, rock guitarist had overdosed on drugs at 27, it was hard to see how anybody could figure out how to put a positive spin on his checkered career in a way that would work for impressionable young readers.

I was just as wary approaching this exquisitely illustrated tale about Billie Holiday (1919-1959), given that it’s aimed at tykes between the ages of 4 and 8. After all, the late jazz legend known as Lady Day died way before her time after a relentlessly-rough life marked by absentee parents from infancy, rape during adolescence, teenage prostitution, a string of abusive relationships, substance abuse, a prison stint for drug possession and passing away of cirrhosis of the liver while in police custody.

Apparently, the doomed diva’s saving grace was being a dog lover, including owning a beagle, a mutt, a poodle, a terrier, a Great Dane and a couple of Chihuahuas. This touching tome is devoted to chronicling Billie’s enduring bond with her beloved boxer, Mister. She and the anthropomorphic canine were ostensibly inseparable, with her cooking and knitting sweaters for him while he would keep fans at bay by guarding her dressing room before and after shows.

The delightful picture book’s plot thickens when we learn that the loyal pet was inconsolable after she was sent up the river. What supplies the primary suspense is the question of whether or not the recently-paroled ex-con would be up to the daunting challenge of a comeback concert at Carnegie Hall soon after her parole.

Of equal import is Billie’s concern for her long-lost hound’s whereabouts. Of course, he miraculously materializes, waiting in the wings just offstage, allowing a very grateful master to share a joyous reunion with Man’s, or should I say, Lady Day’s best friend.

Read HMH Books for Young Readers’s description of Mister And Lady Day: Billie Holiday And The Dog Who Loved Her.