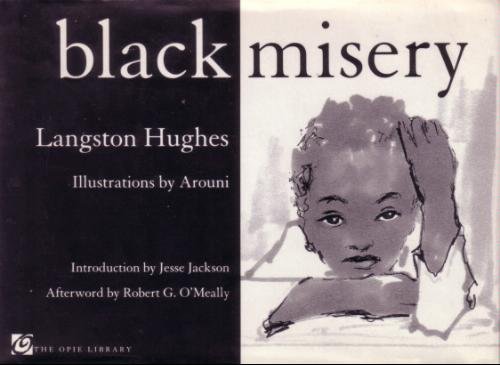 by Langston Hughes, Illustrated by Arouni

Read a Description of Black Misery

black misery is a picture book, but should not be confused with a children’s book (though children may relate to it).  They book can be read in 10 minutes but pondered over a lifetime.

Each page features a one sentence “Misery is…” statement accompanied by a beautiful illustration—simple, yet deep on so many levels.  Despite being penned almost 50 years ago black misery has meaning and relevance today.

In the sample above, a child hears through the media that his neighborhood is a “slum&”.   The neighborhood where he shoots hoops, and his sisters jump double-dutch is described as a slum — a slum, ghetto, or inner-city, but never described as a home.  The accompanying photo poignantly expresses the hurt, humiliation, and confusion of the young boy.  Given a lifetime of hearing these negative labels associated with not only his neighborhood, but his skin tone, his culture and history, we know this young man has a tough road ahead of him.  We may be on that road ourselves.

Hughes’ misery captions reminds us that we share something that is unique to African Americans.  As an African-American you may not relate to everyone of Hughes’ captions but I guarantee, you’ll relate to at least a few.

Share your Own “Black Misery Is…” quotes, and read those left by AALBC readers.