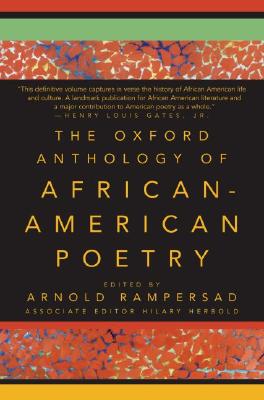 by Arnold Rampersad and Hilary Herbold

Read a Description of The Oxford Anthology of African-American Poetry

’ Excerpted from The Negro Speaks of Rivers by Langston Hughes

Let's be honest, we live in an age where gangsta’ rap is the predominate form of poetry which the average member of the Hip-Hop Generation has been exposed to, committed to memory, internalized and likely emulates. This probably helps explain the concurrent explosion of so-called slams, the spoken-word equivalent of karaoke, live rhyming contests staged at coffeehouses and clubs where entrants take turns trying to outdo each other at the mike in return for exposure and a chance to disseminate their ideas, and, if they’re lucky, a cash door prize.

Let's just not forget that prior to the explosion of rap, for over 200 years, African-American poets addressed their attention to issues other than bling and booty calls. Those dedicated artists labored assiduously to create relevant, lyrical verse which gave expression to the full panoply of emotions and experiences which reflected the black condition in their day.

In the face of cultural repression, they subtly expounded on subjects ranging from slavery, resistance and protest, to love, religion and spirituality.

We all owe a debt of gratitude to those whose words appear on these pages, prophetic trailblazers who sensed the importance of putting pen to paper to preserve the essence of their core realities, regardless of the potential risks and personal costs. So, if you mention names like Langston Hughes, Mari Evans, Claude McKay, Countee Cullen and Gwendolyn Brooks to your kids, and get a blank stare, may I recommend The Oxford Anthology of African-American Poetry, edited by Arnold Rampersad and Hilary Herbold.

Rampersad, a professor at Stanford University, is perhaps best known for Days of Grace, which he co-authored with Arthur Ashe, and for his other award-winning biographies of Langston Hughes and Jackie Robinson. This encyclopedic anthology includes hundreds of entries by dozens of the best, black poets of each generation. If the editors' goal was to present a rich, multi-layered, faithful portrait of the African-Americana as seen through the eyes of some of the community's most-inspired thinkers, I say mission accomplished.