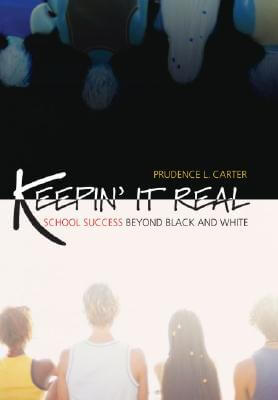 Read a Description of Keepin’ It Real: School Success Beyond Black and White (Transgressing Boundaries: Studies in Black Politics and Black Communities)

’Why are so many African-American and Latino students performing less well than their Asian and white peers in classes and on exams. Why are fewer African-American and Latino students enrolled in advance placement and honors courses? Social scientists provide myriad explanations such as poverty, limited parental education, underfinanced schools, low teacher expectations, bad curricula, low parental involvement and limited access to information, and vestiges of racism in schools.

Culture makes a difference, too. In our society, not all groups, but rather a privileged few get to define what knowledge is and to define the images of the intelligent student. If a pupil does not conform to these images, no matter how sharp his native ability, then he is marginalized.

Students in this study expressed their awareness of these dynamics' and their attachment and engagement are often affected by how teachers and principals, the schools' cultural gatekeepers, parcel out rewards and sanctions according to who abides by dominant cultural rules. Students, like the ones with whom I spoke, observe that educators privilege the styles, tastes, and understandings of white middle-class students, and they feel that their teachers deny the legitimacy of their own cultural repertoires and even their critiques of the information they are expected to learn.’
’Excerpted from the Introduction

There have been an abundance of social scientists in recent years weighing-in on the underachievement of minority students in America's public schools. Generally, these pundits take one of two predictable stances, depending whether they’re on the left or on the right. The conservatives tend to say it's the kids fault for capitulating to peer-pressures to not ’act white,’ while liberals tend to see them as victims of a combination of societal ills.

Well, now along comes Keepin' It Real: School Success Beyond Black and White, a book which turns both of these competing conventional wisdoms on their respective heads. Base on a study conducted by Prudence L. Carter, an Assistant Professor of Sociology at Harvard University, it makes quite a persuasive case that we ought to look at academic disengagement in a new way entirely.

For the author found that contrary to the prevailing stereotypical image of the inner-city student, most of them see success at school as the most practical path to the American Dream. However, they find themselves preemptively marginalized by a system which is quick to deem their cultures, their behaviors, and their perspectives as disruptive, deviant and/or delinquent.

Sadly, these children are generally wise enough to recognize, even very early on in their educational careers, that their teachers and curricula reflect arbitrary prejudices which extol a middle-class white point-of-view to the detriment of any plausible alternatives, including their own. Thus, Carter finds that black and Latino children are failing, not because of lack of drive, desire or effort, but because they have essentially been devalued by elitist attitudes which, by design, rejects them on a cultural basis, delivering the harmful message that they simply don't belong there.

In sum, Keepin' It Real is a well thought-out, groundbreaking opus with a compelling thesis deserving of serious consideration, especially by those academics in a position to implement changes necessary to redefine intelligence in a way which will welcome the contributions of long-excluded segments of the minority student community.