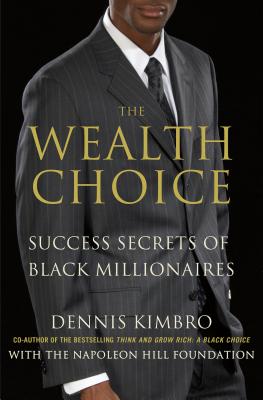 Read a Description of The Wealth Choice: Success Secrets of Black Millionaires

“In spite of Black America’s advances… with more successful, educated and accomplished entrepreneurs and corporate professionals than at any other time in history, the journey is far from over. To be honest, it is only beginning…

Pockets of prosperity, a gulf as vast and deep as the Nile, separates the majority of the Black community from its financial elites as well as from virtually every other ethnic group in our society. The abyss between wealthy Blacks and poverty-stricken Blacks is more than disturbing.

These impoverished enclaves have become the equivalent of a domestic Third World country… Though the challenges… may desperately need addressing, the purpose of this book is to highlight the possibilities that are available to all… possibilities brought to my attention and clarified by Black America’s wealthiest.”
—Excerpted from the Introduction (pgs. 8-9)

What’s the key to becoming a millionaire for an African-American? That’s the basic question posed by Dr. Dennis Kimbro to a thousand of the most affluent blacks in the United States in a study conducted over the last seven years.

Culling from the copious comments collected, Kimbro came up with nine “Disciplines” common to most of the millionaires interviewed. These pearls of wisdom include “Passion and Focus,” “A Strong Work Ethic” and “A Frugal Nature” to name a few.

The precepts struck this critic, quite frankly, as almost common sense, suggesting that perhaps the biggest challenge rests in taking the advice offered to heart and actually implementing it in your daily economic regimen. A mouthwatering recipe for riches courtesy of accomplished African-American elders with proven track records.