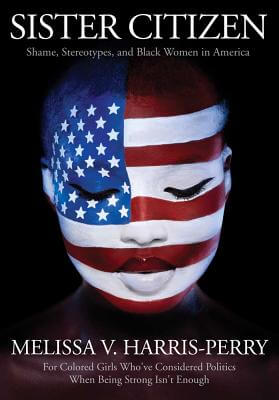 Read a Description of Sister Citizen: Shame, Stereotypes, And Black Women In America

"This book is concerned with understanding the emotional realities of black women's lives in order to answer a political, not a personal, question: What does it mean to be a black woman and an American citizen?

…The particular histories of slavery, Jim Crow, urban segregation, racism, and patriarchy that are woven into the fabric of American politics have created a specific citizenship imperative for African-American women—a role and image to which they are expected to conform.

What is it like to be a black woman in America? That is the basic question explored by Professor Melissa Harris-Perry in her fascinating new book, Sister Citizen. According to the author, this society has historically exerted considerable pressure on black females to fit into one of a handful of stereotypes, primarily, the Mammy, the Matriarch or the Jezebel.

The selfless Mammy's behavior is marked by a slavish devotion to white folks' domestic concerns, often at the expense of those of her own family's needs. By contrast, the relatively-hedonistic Jezebel is a sexually-insatiable temptress. And the Matriarch is generally thought of as an emasculating figure who denigrates black men, ala the characters Sapphire and Aunt Esther on the television shows Amos and Andy and Sanford and Son, respectively.

Professor Perry points out how the propagation of these harmful myths hastemp served the mainstream culture well. For instance, the Mammy suggests that it is almost second nature for black females to feel a maternal instinct towards Caucasian babies.

As for the source of the Jezebel, black women had no control over their own bodies during slavery given that they were being auctioned off and bred to maximize profits. Nonetheless, it was in the interest of plantation owners to propagate the lie that sisters were sluts inclined to mate indiscriminately.

Sadly, that notion has persisted to this day, which is why so many African-American women's rape allegations aren't taken seriously, like that of the NYC hotel maid who recently leveled just such a claim against a well-connected guest from France. Despite the existence of DNA evidence, the charges were dropped, thereby leaving the accuser shamed by the insinuation that the contact must have been consensual.

The author might argue that the stigma of the black female as loose played a role in the case's disposition without even a trial. For as she points out here ever so succinctly, "White men's right of access to black women's bodies was an assumption supported both by their history as legal property and by the myth of their sexual promiscuity," and "Emancipation did not end the social and political usefulness of this stereotype."

A feminist manifesto endeavoring to free sisters forever from the cruel and very limiting ways in which they continue to be pigeonholed.