Book Review: Standing Tall: A Memoir Of Tragedy And Triumph 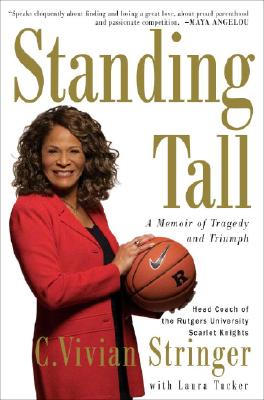 Read a Description of Standing Tall: A Memoir Of Tragedy And Triumph

’As much as I love basketball’ it has always been a vehicle for me to instill values and self-respect in the girls I coach’ I am the last stop before the young women I coach take their place in society, and it is a responsibility I take seriously. My goal is to give them the confidence to dream big and the skills to overcome any challenges they face, whether it's under the basket or in the boardroom.

For thirty years, my mission has been to create the next generation of leaders' My hope is that they will come to share my fundamental and unshakable faith: that each and every one of us has the ability to triumph in the face of adversity, to lift ourselves up and succeed, no matter what trials we encounter. It is a faith that has been tested many times in my own life.’
’Excerpted from the Introduction (pages 2)

When Don Imus referred to the young women on the Rutgers University Basketball Team as ’nappy headed-hos' a year ago, it deeply affected their coach, Vivian Stringer. As she relates in her heartbreaking autobiography, she ’couldn't shake the feeling that I had fallen down in my responsibility to protect these girls.’

So, a couple of weeks later, with the media fallout still building in intensity, she called a press conference in defense of her student athletes who should've been celebrated instead of humiliated after their surprising run to the NCAA Championship game. What almost nobody knew is that while Stringer was in the limelight last April, she was also privately battling breast cancer at the time. On top of that, her mother suffered a stroke in the midst of the controversy.

Sadly, this was not the first time that the Coach Stringer had been tested in this fashion. In 1981, her daughter, Nina's spinal meningitis had been misdiagnosed by a pediatrician as a common cold. Consequently, her daughter would never be able to walk or talk. Then, in her early forties, Stringer was widowed when her husband died unexpectedly, leaving her to raise their three kids alone.

These are just a few of the host of woes visited upon Vivian Stringer over the course of a terribly tragic life which reads a lot like the Biblical tale of Job. Poignantly written without a whit of bitterness, Standing Tall is as moving a memoir as I ever remember reading. The tears started flowing from the first page and didn't stop till I finished the book.

Priceless pearls of wisdom from a true role model eminently worth emulating.

Read Knopf’s description of Standing Tall: A Memoir Of Tragedy And Triumph.