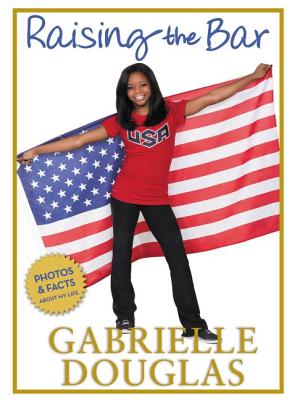 Read a Description of Raising The Bar

“Gabrielle Douglas is the first African-American and first woman of color from any nation to win an Olympic gold medal in the individual gymnastics all-around competition… That is a big accomplishment for a 4’11” 16 year-old from Virginia.
But she is still a normal American teen who is figuring out who she is and what’s next in her life. Dive into Gabrielle’s world from her perspective, and get to know this bubbly athlete who stole America’s heart and made an entire country cheer.”
—Excerpted from the Introduction (pg. 9)

Gold medal gymnast Gabrielle Douglas skyrocketed to fame on the strength of her nonpareil performance at the 2012 Olympic Games in London. And ever since capturing the country’s imagination, she’s been on a whirlwind tour of the TV talk shows and had her face grace millions of boxes of Kellogg’s Corn Flakes.

The talented 17 year-old role model published an autobiography last fall, and has just now released another aimed at impressionable young minds inclined to place her up on a pedestal. Entitled “Raising the Bar,” this coffee table book is more like a fancy, bound fanzine than her longer-winded, anecdote-driven memoir.

Its pages arrive filled with over a hundred, full-color photos of Gabby, both in action on the gymnastics floor and unwinding with family and friends. Betwixt and between, we’re treated to many of her favorite inspirational sayings, especially verses from Biblical scriptures that have served her well in times of trouble.

For instance, from Psalms, she quotes: “Let all that I am praise the Lord,” from Timothy, there’s “For God hath not given us the spirit of fear, but of power, and of love, and of a sound mind,” and from Matthew, “Let your light shine before others, that they may see your good deeds and glorify your Father in Heaven.” In fact, we find Gabby praying that “God will keep me humble and grounded” to “be a blessing and give back to the people who have supported me.”

In terms of that support, she freely gives props not only to her mother (“Do you have any idea how many sacrifices she made to pay for my training?”) but to her sisters (“Arielle gave up ballroom dancing and Joyelle stopped ice-skating.”) and big brother (“John has always been so protective.”) She also thanks the Partons, the host family she lived with in Iowa, her coach, Liang Chow, and champions she’s looked up to like Tim Tebow, Dominique Dawes and Carly Patterson.

Besides humbly spreading around credit for her success, Gabby shares some personal info, such as her favorite books (the Twilight series), fast food (McDonald’s), clothing brands (Nike and Miss Me Jeans) and TV show (The Vampire Diaries). A kid-friendly opus which makes it easy to understand why a poised and pretty shining star never let her Olympic glory go to her head.

Grace, Gold, and Glory: My Leap of Faith by Gabrielle Douglas and Michelle Burford - Book Review