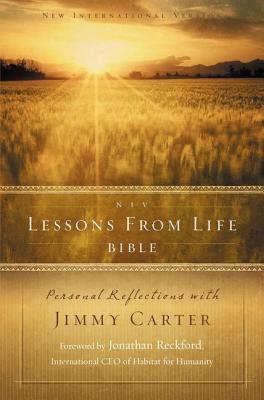 "Throughout the years of his public life, former President and Nobel Peace Prize-winner Jimmy Carter has lived out a conspicuous faith.. [He] has been leading Sunday school classes ever since he was an 18 year-old ensign at the U.S. Naval Academy…

For over 6 decades, he has been examining the Scriptures and teaching classes to adults… [This] Study Bible is designed to… amplify the deeply held convictions of one of the most important and influential voices of our time."
—Excerpted from the inside book jacket

Jimmy Carter has been teaching Sunday school all of his adulthood, even as Governor of Georgia and President of the Unites States. The difficult decisions he had to make while in office, whether about caring for the poor, finding peace in the Middle East, fighting an enemy, advancing human rights or reversing nuclear proliferation, were all influenced "by his deeply-held belief in the Bible."

After returning to private life, Carter not only resumed hosting Sunday school classes at Marantha Baptist Church in his hometown of Plains, but he remained “an outspoken advocate of the poor and disadvantaged.” And as a committed Christian, he has endeavored to follow Jesus’ example of attending to the least of his brethren by devoting his blood, sweat and tears to a variety of worthy causes.

Jonathan Reckford, CEO of Habitat for Humanity, credits Carter and his wife, Rosalynn, for donning hard hats every year for over a quarter-century to help his organization build and repair homes for folks in desperate need of affordable housing. Reckford states that their participation has never been a mere photo-op, given that “No one works harder on … site than President and Mrs. Carter.”

If you’re interested in understanding the source of Jimmy Carter’s inspiration and abiding faith, you might want to invest in this special edition of the New International Bible which highlights selected Scriptures, and is supplemented throughout by a life’s worth of his favorite lessons, reflections and prayers. For instance, he offers a literal interpretation of Jesus’ suggestion that “We must do the works,” (John 9:3-5) as an urgent imperative to minister to the needy “today, right now.”

The Good Book annotated by a former president who probably would prefer to be remembered as a selfless servant of God.