Book Review: In My Bedroom 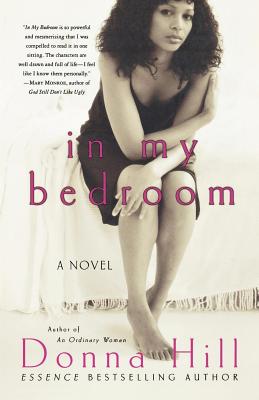 Read a Description of In My Bedroom

Rayne Holland, budding film director, wife and mother appear to have it all. She’s poised to be lauded for her work in the film industry when she’s involved in a terrible accident.  Later when Rayne attempts to take her own life and ends up in a mental institution, everyone’including Gayle, Rayne's best friend and Pauline, her therapist’wants to know what caused the disintegration of a once seemingly strong and accomplished person.

This is the crux of Donna Hill's latest book In My Bedroom. It's about the mending of Rayne, this complex young woman who has gone into hiding deep inside of herself to keep a dreadful childhood secret.

Hill deftly weaves together the lives of the three main characters, and the way they intersect is what the makes the story so potent. While watching Rayne recover, Gayle and Pauline are able to see her afflictions being peeled away layer after layer.

The shifting points of view allow us to see the characters from a variety of angles. I was especially intrigued by the different ways Rayne and Gayle viewed Rayne's husband, a source of envy for Gayle and a terrifying presence for Rayne.

In My Bedroom reminded me of so many things I've learned through the years about healing. Here you have three individuals, Rayne, Gayle and Pauline who have come together in this situation, yet they all have something very different to learn from each other.

Appearances deceive. This is the lesson for Gayle who despite her love for Rayne was also intensely jealous of the self protective fa’ade Rayne developed. Gayle was so obsessed with competing with her best friend she would even ’test’ her boyfriends asking them what they thought of Rayne. One man, James Davis, did not find Rayne attractive. He passed the test so Gayle married him while she still pined away for everything that was Rayne’s. What she would discover is that all Rayne really owned beyond beauty and talent were years and years worth of a deep seated, agonizing pain.

And Pauline, while treating Rayne, must also confront the personal demons she should have exorcized long ago considering her position as a mental health practitioner.

For me books dealing with child abuse are difficult to read. Sometimes these stories can be so grotesque all I can do as a reader is to pity the maltreated character and be selfishly glad I am not them! I appreciated Hill's book because she was able to strike the necessary balance between past brutality, current milieu and hope for the future. The work is nothing short of illuminating. As I read, I thought if these women endured this, well then I can overcome anything in my own life. At the end of the story, I wanted each woman's strength.

The book is about opening ourselves up to see what's inside and extending ourselves for the sake of others. While caught up in our own problems, sometimes we can’t even imagine what another person might be going through. While I was reading I was thinking of the African proverb: it takes a village to raise a child. To this I would add, we all need a village’adults and youth alike.

As Rayne, Gayle and Pauline discover, self liberation is not a solitary effort. Within a community (no matter how tiny) is where fractured people are made whole.

Read St. Martin’s Griffin’s description of In My Bedroom.