Book Review: They Tell Me Of A Home: A Novel 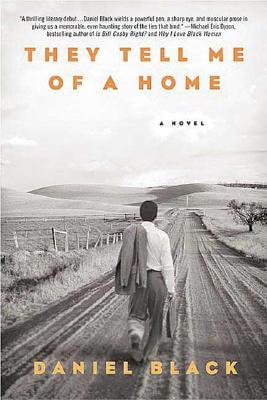 Read a Description of They Tell Me Of A Home: A Novel

I was in the mood for a Southern gothic novel. For those of you who may not know, a Southern gothic novel is one that takes place in the South (surprise, surprise) and involves usually a murder or two, incest, anger, lust, longing, revenge and secrets all wrap in tears and twang. I let my fingers do the walking went on Amazon.com intending to get another Erskine Caldwell novel, instead I ended up ordering They Tell Me of a Home by Daniel Black. They Tell Me of a Home certainly fit my definition of Southern gothic. I loved the majority of the book. I had a problem with the ending, but the book was a wonderful read. I had not heard of Daniel Black before, but I’m glad that I have now.

Tommy Lee Tyson is returning to his childhood home in Swamp Creek, Arkansas after running away ten years ago when he was 18 years old. He was getting away from a mother who hated him and a father who was extremely hard, emotionally, and uncommunicative. Tommy only felt love from his grandmother, who had died, and his little sister, Sis. After receiving his PhD in African American studies and awaiting word on whether he had secured a teaching position; Tommy returns home, as quietly as he left, to see Sis. Almost immediately he discovers that Sis had died and is buried in his parent’s backyard. His parents, his brother, nor anyone else will tell him how she died. Tommy vows to find out what happened to Sis. Before he leaves home again, Tommy will unearth all kinds of family secrets.

After reading They Tell Me of a Home; I was happy and content. My urge for this type of story was wholly satisfied. The characters were nicely developed. The narrative had a nice flow. There was plenty of drama and secrets in the story that kept me entertained. Black kept the story tight and consistent. I had a good time. There were a few elements of the story that I did not like: the ending and the main character Tommy.

Earlier when I stated that the characters were well developed, I meant it. Tommy is a fine character but he got on my nerves. Tommy is a whiner. If there is one thing I hate with a passion it’s a grown ass man whining. When Tommy comes back home and finds that Sis is dead, he spends the next 100 pages or so begging and whining, like a 5 years old kid, for his family to tell him what happened to her. I wanted to slap him and tell him to shut the hell up! Even I have to admit that as much as Tommy got on my nerves, Black created the perfect catalyst in Tommy to figuratively blow up the Tyson family.

The story of the Tyson family is utterly fascinating. There was drama galore and I loved it! Black definitely gave Southern gothic a much needed African American flavor. I’m not going to reveal any of the details because Black created a literary quilt that to loosen and pull one thread would lead to the whole thing unraveling. The story is too deliciously demented for me to do that.

The ending: I’m not going to give you any details concerning the ending, but I will say that it had a rushed feel to it. Black crammed a lot of details in the last 20-30 pages of the book. There are a lot of juicy secrets that are revealed and loose ends that are tied up. I wish Black would have taken the time and care in laying out that portion of the story that is apparent in the first half of the book. The novel would have been richer because of it.

Read St. Martin’s Griffin’s description of They Tell Me Of A Home: A Novel.