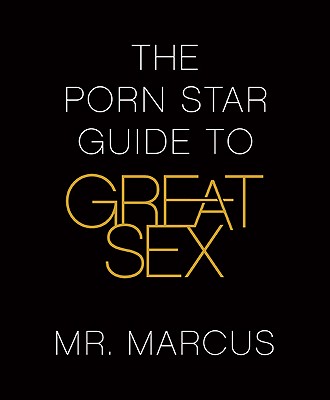 I've seen it all and I've done most of it, s there's something here for everyone… After you're done, you'll want to put everything you've read into action.
-- Excerpted from the Introduction (pgs. 3-5)

It appears that the well-endowed, 40 year-old adult entertainer is now looking to go legit, between a recent role in the Hollywood film Finding Bliss and writing this sex guide. Mr. Marcus leaves little doubt about his confidence in the sack, given his lack of performance anxiety over the course of an enduring career during which he specialized in interracial skin flicks with salacious titles like Sex for Hire, Once You Go Black, Show Me the Money, and the World's Luckiest Black Man, where he supposedly satisfied 100 different women.

Still, it's one thing for a stud to be able to copulate on cue, and quite another entirely for him to be doling out advice about lovemaking. After all, you'd think that a compulsive exhibitionist with such a big ego might be a narcissist incapable of exhibiting any sensuality towards the object of his injection.

But no, Mr. Marcus reveals a sensitive side in this comprehensive opus which touches on every area of human sexuality you could think of, and then some. The book is broken up into 16 chapters ranging from conventional behavior like kissing and the missionary position all the way to bizarre practices including group sex and sadomasochism.

Marcus' literary style might best be assessed as a playful mix of creative and clinical as he sets about describing the path to maximum satisfaction via a variety of increasingly adventurous positions. Leaving nothing to the imagination, he augments his words with fairly-graphic illustrations reminiscent of those contained in The Joy of Sex. And he had the good sense to devote the final chapter to promoting safe sex and AIDS prevention, which is a good idea if you're considering some of his kinkier suggestions involving multiple partners.