Book Review: Step Out On Nothing: How Faith And Family Helped Me Conquer Life’s Challenges 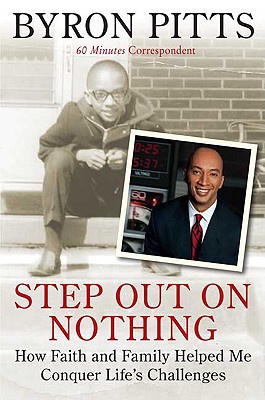 Read a Description of Step Out On Nothing: How Faith And Family Helped Me Conquer Life’s Challenges

’We all have those defining moments in our lives. Moments of great joy. Moments of unspeakable sadness and fear. We usually think we're alone. But if we look into the corners of our memories, we’ll find them’those people who had faith in us. Those times when a grace beyond earthly understanding touches us.

This is a story of those times. Those people. And the lessons they taught me.’
’Excerpted from the Introduction (page 5)

Earlier this year, Byron Pitts became the heir apparent to Ed Bradley's coveted spot on 60 Minutes when he was named a contributing correspondent to the long-running, television newsmagazine. While many might have deemed Mr. Pitts' ascension to the plum position a natural outgrowth of his Emmy-winning work covering such major stories for CBS as the 9/11 Attacks, Hurricane Katrina and the Afghan War, the truth is that this talented reporter had to overcome a host of seemingly-insurmountable childhood challenges en route to turning himself into a great success story.

Byron and his siblings were raised in Baltimore by a single-mom who had the foresight to make the sacrifice to send him to the local Catholic school on her modest seamstress' salary, even though they were Baptists who went to Church every Sunday. The teasing was already tough enough for her shy, sensitive, freckle-faced son, between his scrawny build and his thick, Coke bottle eyeglasses, so adding a parochial school uniform to the mix only served to make him more of a mark as he passed through the ’hood.

For on top of that nerdy image, Byron not only suffered from a bad stutter, but for years hid the fact that he was also functionally illiterate. Fortunately, with the guidance of several critical mentors, he managed to turn all those stumbling blocks into stepping stones. He eventually mastered reading, writing and speaking without stammering, and went on to earn a BA in journalism and speech communications from Ohio Wesleyan University before embarking on his enduring, TV career.

Pitts humbly recounts these admirable achievements in Step Out on Nothing: How Faith and Family Helped Me Conquer Life's Challenges. The moving memoir proves to be as inspiring as it is sincere, with the potential to serve as a source of motivation for any individual who dares to dream big in the face of overwhelming learning disabilities.

He drives home the point that if he could do it, anyone can, via the matter-of-fact conclusion that, ’There is nothing remarkable about my abilities or my intellect. I was simply blessed to be born in the greatest country on earth and blessed to have been surrounded by wonderful people who stood in the gap at every vital moment in my life.’

Congrats to Byron Pitts for having the guts to go public with such an intimate testimonial to the power of passion and persistence, especially when one has faith in God and strategic help along the way from some loving role models.

Read Palgrave Macmillan’s description of Step Out On Nothing: How Faith And Family Helped Me Conquer Life’s Challenges.