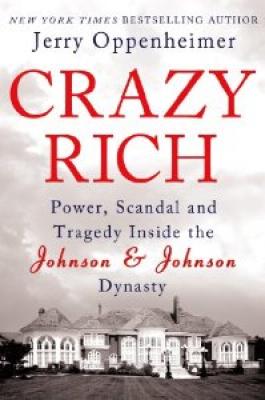 Read a Description of Crazy Rich: Power, Scandal, And Tragedy Inside The Johnson & Johnson Dynasty

“Heirs to a Band-Aid and Baby Powder fortune, the Johnsons have enjoyed unimaginable wealth since Johnson & Johnson was founded in 1886—but their personal lives have been marred by bitter feuds, violent and costly divorces, sexual aberration, and myriad tragedies…

Their entrepreneurial prowess has brought them enormous power and success in business, but their private lives have been haunted by misfortunes through the generations… This scrupulously researched biography… places the Johnson & Johnson family under a journalistic microscope… [and] reveals the secrets behind their immense power, their extraordinary wealth, and their provocative dramas…

Based on exclusive on-the-record interviews with family, friends, business associates, lovers, and detractors, Crazy Rich serves up the first definitive and objective look at a platinum dynasty that was once termed ‘perhaps the most dysfunctional family in the Fortune 500.’”
—Excerpted from the book jacket

If you’re curious about how the other half lives, have I got a book for you! While Robin Leach would have us believe that it’s all “champagne wishes and caviar dreams” for the well-to-do, the truth might be far afield from the fluff pieces the terminally-exuberant host of Lifestyles of the Rich and Famous routinely served up on his syndicated TV show.

By contrast, Jerry Oppenheimer is a journalist just as obsessed with celebrity, but he’s staked his career on exposing the ugly underbelly of fame and fortune. He’s written unauthorized biographies of such public figures as the Clintons, Martha Stewart, the Hiltons, Barbara Walters, Jerry Seinfeld and Ethel Kennedy, to name a few.

The super sleuth’s latest expose’ is a warts-and-all biography of the Johnsons, heirs to the mammoth Johnson & Johnson Band-Aid fortune. While the multigenerational opus opens with a chapter on the heir who is currently most-visible, New York Jets owner Woody Johnson, the 500-page tome is fairly encyclopedic in nature, as it covers the history of the enduring dynasty from its inception right up to the present.

Listen, any family tree that stretches back to the mid-19th Century is bound to have its share of tragedy. After all, if immortality were something that money could buy, the rich would live, and only the poor would die.

Nevertheless, the Johnsons do seem to have been burdened with a Job’s worth of adversity, to make a Biblical allusion. For instance, you may remember the drug-related death of Woody’s 30 year-old daughter Casey, which was widely-reported in the tabloids in January of 2010. At the time, the openly-bisexual celebutante was engaged to Tia Tequila, the flamboyant star of her own reality television series. 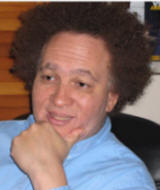 AALBC.com Reviewer Kam Williams is part of this story!

You might find it interesting to learn that Casey’s parents divorced, and that while Woody acquired a pro football team, his ex, Sale, married a former football star, Ahmad Rashad. And Ahmad isn’t the only African-American mentioned in the book, somehow this critic ended up featured on a few pages. But you’ll have to shell out the bucks to buy it to find out exactly why.

Overall, Crazy Rich is a riveting page-turner you won’t want to put down, provided salacious stories about the bizarre behavior of the Jet Set are your cup of tea.