Book Review: David and Goliath: Underdogs, Misfits, and the Art of Battling Giants 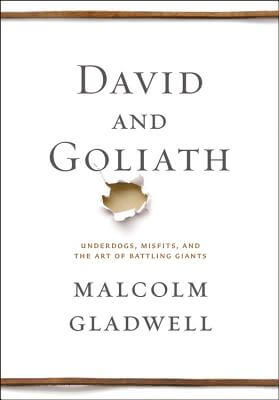 Read a Description of David and Goliath: Underdogs, Misfits, and the Art of Battling Giants

“Three thousand years ago on a battlefield in ancient Palestine, a shepherd boy felled a mighty warrior with nothing more than a stone and a sling, and ever since then, the names David and Goliath have stood for battles between underdogs and giants. David’s victory was improbable and miraculous. He shouldn’t have won.

In David and Goliath, Malcolm Gladwell challenges how we think about obstacles and disadvantages, offering a new interpretation of what it means to be discriminated against, or cope with a disability, or lose a parent, or attend a mediocre school, or suffer from any number of other apparent setbacks.”
—Excerpted from the Inside Book Jacket

In best-sellers like Blink, Outliers and The Tipping Point, Malcolm Gladwell has proven himself quite adept at breaking down complex psychological, scientific and political concepts in such a way that they are readily digestible for mass consumption. This popular public intellectual and veritable man of the people has done it again with David and Goliath, an earnest examination of why so many manage to flourish in the face of seemingly overwhelming odds.

He opens with a discussion of the classic showdown from which the opus borrows its Biblical title. There, he suggests that, contrary to legend, diminutive David might not really have been at a disadvantage to the giant Philistine at all. For, the author points out that even a muscle-bound soldier armed with a sword and a shield would probably still be no match for a civilian skilled at hurling rocks with a sling from a safe distance.

The balance of the book is basically an exploration of illustrative examples of the triumphs of real-life underdogs in supposedly lopsided conflicts. Again and again, in case studies ranging from the African-American fight for civil rights in the segregated South to the Irish Catholic struggle for freedom from the British, we learn that military might was no predictor of the eventual outcome.

Gladwell also relates the triumphs of several successful individuals as further proof of his central thesis, such as dyslexic David Boies who became one of the country’s leading lawyers, and orphaned Emil Jay Freireich who grew up to become a top medical doctor.

Persuasive, if counterintuitive, food for thought surmising that a child might be better off having to surmount a considerable life challenge rather than being born with a silver spoon in his or her mouth.