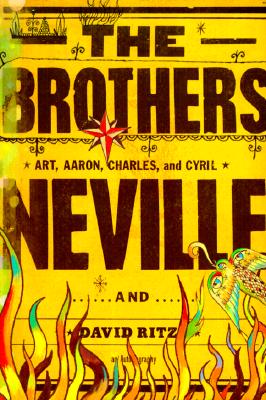 Read a Description of The Brothers Neville

Musical Gumbo Features Some of Life's Ups and Lotsa Life's Downs
The Neville Brothers new autobiography, The Brothers, co written with celebrity biographerDavid Ritz, is truly four biographies in one, for the personalities and voices of Art, Charles, Aaron and Cyril Neville come through distinctly. Their individual perspectives interweave and reinforce each other almost like a harmonious musical fugue.

The brothers were born in New Orleans to loving and supportive parents. Love for music is the book's continuous thread and the Nevilles feel music at a level that surpasses intellect -- it is their life's blood. They came of age in an atmosphere (New Orleans), and at a time (the 1950s), that was drenched and drippin' with excellent sounds of all types: pop, jazz, blues and do wop. The Nevilles admired other cats, and one of the pleasures of reading The Brothers is hearing this bunch of passionate music lovers describe the artists they dig. Art:" [Bill] Dogget's keyboard attitude was too cool; he said it in a funky shorthand that made everyone wanna move." Charles: "Gene "Jug" Ammons was my idol. He had the big macho tenor tone that sounded like manhood to me. I wanted Jug's sound and James Moody's technique"

While their love of music is genuine, know this: In the conduct of their personal lives the Nevilles were neither Altar Boys nor Boy Scouts. The Brothers is a primer on all kinds of scams, hustles, heists, and easy-life-getting-over. There is no addiction, weakness, vice or unsavory behavior that the brothers have not experienced. Heroin? Yup. Freebase? Check. Robberies? Been there. Prison? Ditto. Womanizing? Fer sure. Lots and lotsa babies? Why, of course. The catalogue of misdeeds specific just to their immediate family leaves readers kind of breathless.

The Nevilles are very matter of fact about their sins. There were few options for poor black men of their era, and there seems to have been almost an inevitability to their lives taking this path.

But their failures need more analysis and probing, for while they own up to their misdeeds they never dig deeper to understand them. The Nevilles were from a loving stable home with two working parents. They were religious, healthy, good looking, had a supportive extended family, and a love of and talent for music. What went wrong? Their transitions into manhood led them into all kinds of trouble, aborted military service, drugs, incarcerations, doomed marriages, and unplanned fathering. A real soap opera. Is their story truly emblematic of black men in America: destined for trouble? With love and the added bonus of the gift of music in the family, why did all four of the Nevilles go wrong? The brothers are advised to rethink this part of their story because a more stringent coming to terms with their weaknesses might possible better serve the entire black community.

Co writerDavid Ritz deserves special commendation for weaving all of the brothers' voices into a coherent symphony. This was not an easy task for each Neville brother has personal traits that represent extremes: Art is the most ambitious, a leader and go-getter with the greatest vision. Aaron is the most spiritual and soulful and loves fighting, mischief and muscle building combined with his unabashed love for the Blessed Virgin Mary. Cyril, the most political and intellectual is desperate for inclusion and acceptance, but his negative point of view is often alienating. And Charles, while possessing a scientific insight and an ability to see spirits, is the brother who is in greatest need of a break, for more than any of the brothers his life is an unbroken chain of jail and drugs.

Commenting on his situation, Charles, who was sent to the infamous Angola prison (one of the book's most interesting digressions), for possession of two reefers states: "I felt like a victim, but I also know I had been toying with this kind of disaster for years. I never stopped taking drugs, never stopped stealing, never stopped leading the kind of life that could, at any moment explode in my face."

The Brothers describes a long road to self-acceptance that many African American men face. For the lion's share of the book The Brothers is an endless litany of the Neville's messes, missteps, brushes with the law, wrongs done to them, fights they were in, behinds they kicked, drug deals that went down’you get the idea. No one can say that this book is dishonest or sugar coated. Cuss words and adult situations abound. This is not a book for young readers.

Years of struggle ensue, for musical success, against addiction, for unity as brothers, as family, and against crime. Decades of this kind of back and forth. Finally Aaron describes a turning point. "Maybe it was the death of [Uncle] Jolly, maybe it was the dope, but I was feeling increasingly discouraged’I prayed to Saint Jude to be there in spirit when we started to record. I prayed to find the strength to overcome my addiction. I realized I had to take the initiative to find a way out of hell. And this time I was determined to do it. And at long last Aaron and the brothers conquer their demons. In the late eighties and nineties it finally all came together and the Brothers experienced individual and collective musical successes and long term stability in their personal lives.

With The Brothers readers get an impeccable commentary on pop music, a social history of the times and insight on the plight of black men in America. While personal introspection is scarce The Brothers is rich with anecdotes on the music biz, the entertainment scene and other famous musicians. The whole spirit of the book is very for real and joyful, just like their live recordings and performances. Like a spicy gumbo ya just gotta gobble up the whole thing -- the stringy okra along with the savory shrimp. Eat it up and Let the good times roll!

Read Little, Brown and Company’s description of The Brothers Neville.