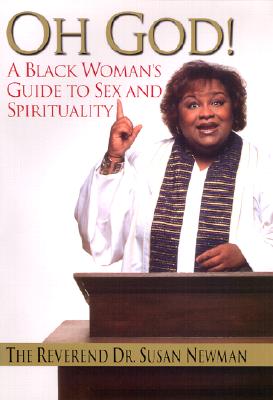 Read a Description of Oh God!: A Black Woman’s Guide to Sex and Spirituality

Sexuality is an extremely powerful force and a very real and large component of everyone's existence. Yet black churches, like most religions through the ages, have urged containing it, ignoring it, suppressing it and denying it. This is like ignoring an elephant sitting at the dinner table. Rather than fostering spiritual enlightenment this attitude has lead to unending frustration and struggle. Thank God that the Reverend Dr. Susan Newman has the grace and chutzpah to drop a bomb on this long ignored issue in her new non-fiction book, Oh God!

"’I had to write Oh God! Somebody has to own up to the fact that black folks need to start talking about sex from the sphere of the church. All of black life has its origins in the church, and we need to not let sex stand outside of our sanctuaries as if on punishment."

Why didn't someone think of this before? Oh God!'s central message on uniting sexuality with spirituality is an idea whose time is long overdue. Contrary to what was preached in the pulpit, black churches have long had a "wink and a nod" attitude toward the sexual behavior of its members, contributing to confusion and double talk that advanced no one's well being. News headlines of the last several years about sexual misconduct in Christian churches -- Catholic and Protestant, Black and White -- make addressing Christian sexuality especially timely. "We are doing a disservice to our daughters, and ourselves, trying to fit a 2001 peg into a 400 B. C. hole. We need to change the dialogue. We need to keep it real and tell it like it is. Women in ancient civilizations did not have to deal with sexual abstinence as women do today; girls were betrothed at the age of five and given in marriage between the ages of thirteen and sixteen. However, today we have women who go to college, pursue careers and sometimes delay marriage and childbearing ’They are not any less spiritual, or any less righteous, because they have chosen a different path."

Newman ushers in great blasts of fresh air in an area that has been stagnant with old rigid thinking and behaviors. Oh God! immediately pulls readers in with its directness, honesty, fresh pacing and intelligence. Newman is a minister who writes with the sensibility and manner of a best friend, telling readers both what they want to hear and what they need to hear. Oh God! might also be useful for men who want to understand women better. Women and girls of all ages will find Oh God! to be very accessible, and very intelligent, yet easy to follow and relate to.

Oh God! tackles women's sexuality via reexamining key passages of the bible. It revisits the Mary and Martha story, analyzes how Jesus perceived women, and reviews how women were regarded in the Old and the New Testaments. Oh God! also provides a good exploration of Mary's thoughts and emotions at experiencing an "Immaculate Conception". The apostle Paul comes off as faulty and off base, even villainous, where as Jesus is a hero and restorer of a woman's proper place. Reverend Newman, unsurprisingly, finds the bible's Song of Solomon, positive, affirming and uplifting.

The book takes readers through a lot of changes, making abrupt turns from scholarly, religious, comical, objective, and judgmental. This frequent shifting of perspective contributes to flightiness -- the book touches on topics lightly and then moves on. The book would have been improved by having an index, and more citations. Commendably Oh God! does offer Q and A worksheets at the end of each chapter that force readers to take the time and think through their responses to the issues raised.

Newman, with her candor and willingness to directly tackle delicate issues of sex and spirituality, is a more authentic claimant of the place that Reverend T. D. Jakes has assumed in the popular imagination. But the book's cover and title, while friendly and inviting, positions Oh God! (and by extension the topic of spirituality and sexuality) into the realm of comedy, and does not reinforce the importance and validity of Dr. Newman's messages. With her finger pointed upward, eyes wide open and mouth agape the cover portrait almost makes Newman look like a stand up comic in clerical garb. Her humorous and pleasant approach nicely propel the book, and it will be a shame if readers are deterred from picking up on these messages, (which are so crucial to women's well being), because they might assume that the book will be a Moms Mably type laff-fest.

Oh God! addresses questions and issues that every Christian woman has, but has been discouraged from asking due to tradition, socialization, and cultural norms. The Black Christian churches have never squarely addressed issues of anyone's sexuality including males, gays, clergy, youth, and especially women. A patchwork of flimsy philosophies, from silence, don't ask don't tell, bogus righteousness, holier than thou, out and out two facedness and hurtful knowingness have long prevailed to the satisfaction and enhancement of no one, and the detriment of most.

Yet this ignorant stance has prevailed through the ages, with the black church being no exception. Double standards have always existed for the sexual behaviors of men and women. Women's sexuality has always received the brunt of this warped perspective. "Our church and society still hold women to a greater restrictions, based on gender. The last frontier of freedom for women today is a sexual one. This book in no way is the final word on the subject of sex and spirituality, but it is the beginning of the conversation for the Black church."

Newman labels the church's restrictions on women as leading to "sexual schizophrenia", but divided-ness or a compartmentalization might be a more accurate word. Logically Newman advocates a unification of not just a person's sexual self with their spirituality, but flat out states that the totality of our being should be merged with our spirits including the workplace and social justice issues.

After several years Oh God! will be regarded as a seminal book. Dr. Newman is to be commended for her courage and her excellence in serving readers with information they want and need to know, and in forcing the church to live up to its potential.

Read One World/Ballantine’s description of Oh God!: A Black Woman’s Guide to Sex and Spirituality.