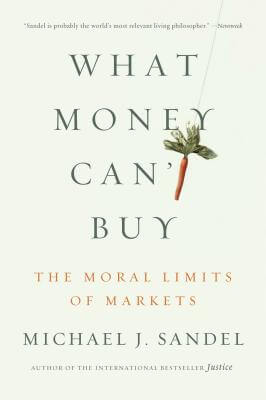 Read a Description of What Money Can’t Buy: The Moral Limits Of Markets

“We live at a time when almost everything can be bought and sold... Over the past three decades, markets—and market values—have come to govern our lives as never before… As the Cold War ended, markets and market thinking enjoyed unrivaled prestige.

And yet, even as growing numbers of countries around the world embraced market mechanisms in the operation of their economies, something else was happening. Market values were coming to play a greater and greater role in social life…

Today, the logic of buying and selling no longer applies to material goods alone but increasingly governs the whole of life. It is time to ask whether we want to live this way.”
—Excerpted from the Introduction (pages 5-6)

Economists have been referred to by cynics as emotional cripples who know the price of everything but appreciate the value of nothing. Increasingly, the same might be said of people in general as we’ve come to embrace the commodification of virtually every aspect of human existence.

For example, nowadays, you can pay an East Indian woman to serve as a surrogate mom for $6,250. Or you can shoot a rhinoceros on the endangered species list for $150,0000; or rent out the space on your forehead as corporate ad space for $777.

In Europe, the cost to pollute is $18 per metric ton. In California, you can upgrade your prison cell for $82 a night. And a mercenary soldier of fortune collects $1,000 a day to fight in Afghanistan.

Do you find this state of affairs unsettling, or are you so jaded that you accept the notion that everything has a price. If that is the case, where does it end? Will we soon not only be hiring strangers as friends and lovers, but even to be our spouses?

This is the dire dystopia contemplated by Michael J. Sandel in What Money Can’t Buy: The Moral Limits of Markets, a thoughtful opus examining a cornucopia of ethical questions touching areas ranging from medicine to law education to personal relations. Should society intervene and, for instance, prevent a fertile female from renting out her womb to another who is barren? Or does everything have its price as suggested by Red Foxx ages ago in an off-color skit on a Laff Record lp.

How we answer that question collectively will determine whether there’s any hope of reversing capitalism’s runaway exploitation of the human condition.

Read Farrar, Straus and Giroux’s description of What Money Can’t Buy: The Moral Limits Of Markets.