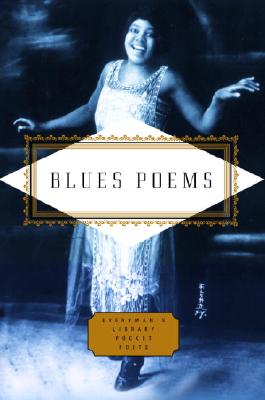 Read a Description of Blues Poems

Please allow me to set off the mood of this review by quoting one of my favorite Blues songs:

These words could so well describe my relationship with the blues; it belies me to refer to it as a female entity. Kevin Young has done it like no one before him. In his edited anthology Blues Poems he further demonstrates how adept his knowledge is of blues, its history, and how pervasive it is in modern poetry. He also puts together a magnificent preface to the book that helps describe and educate readers to the brief history of a form of music that has literally influenced every form of music that we listen to today. Before I digress, I really want to laud this incredible collection without coming across as groveling. Young has really done a highly commendable job with his editing of such a unique compendium.

The first part of Blues Poems pours the solid foundation of this anthology by introducing some of the most influential modern poets who have been charmed by the allure of Blues Music. The section titled Standards is focused upon poems written around or prior to World War II. Poets such as Langston Hughes, Claude McKay, Countee Cullen, and Waring Cuney emoted prose in response to their experience with Blues. Among these Langston Hughes is recognized as being the perhaps the most powerful. His writing is an unabashed replica of Blues' lyrical form. He was a master of capturing the pain wrapped in humorous irony in his lyrical delivery. I sip Hughes poetry from Mason jar filled juke-joint spirits that sting, yet soothe in the after math.

—From Morning After by Langston Hughes

Young follows this well-balanced introduction with more historical samplings of original song lyrics from Blues singers/songwriters. His choice of artist was meticulous. The lyrics in the section called Some Songs are the origins of the acoustic style of Blues. W.C. Handy, Mamie Smith, Bessie Smith, Leadbelly, and the indomitable Robert Johnson were responsible for bringing the Blues from the Southern work fields into a recording studio. These artists legendary and their poetry is the definition of the Blues.

The rest of this anthology is delivered to us in the key of F. The sections Form, Facing Off, Figures, and Freight are the instruments of poets, poems, and prose that are strung in blues. Even in Finale (For Bessie Smith) where poets pay homage to a woman, a voice, and a life filled with so much pain that even her laughter seemed heavy.

Young has brought together works of art that are the blues either in their form, subject matter, lyrical repetition, or just that familiar blues feeling. Blues Poems reminds us that just when we thought we have a definition of the blues, the blues re-writes itself.

Kevin Young sees the relationship of blues and poetry. Trying to define either one obfuscates the mystery of their hold on us. Blues Poems cannot solve that mystery, but it will make probing for it so much sweeter.