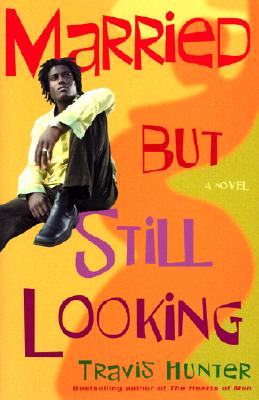 Read a Description of Married but Still Looking: A Novel (Strivers Row)

This pensive musing from a rap legend neatly summarize the challenge faced by Genesis Styles, an almost 30-year-old, ex-NBA 12th man aspirant and semi-decent fianc’e. In fact, Married But Still Looking is a lot like a great hip-hop album, weaving vulgar yet amusing realities out of complex and harsh histories. It is an honest and multidimensional portrait of a self-centered player and his entourage, framed by the crooked consequences of his own indiscretions. But be warned: There ain't no half-stepping on this journey.

Married But Still Looking, (May 2002), is an appropriately ambiguous title for a story that masterfully displays multiple interweaving plots. Readers familiar with Travis Hunter's previous novel (The Hearts of Men, Strivers Row) will recognize his decidedly male perspective, in the sadomasochist dramatics of Genesis, the smooth operating protagonist. On the surface Genesis is a spoiled and sexy womanizer, who prowls the streets of Atlanta with a shaky bank account, a black book of yellow page proportions, and a penchant for O.P.P. But Hunter digs deep into this player's past and skillfully develops Genesis as a "guy's guy" with a soft side -- someone who is desperately swatting off maturity and personal accountability with one hand, while valiantly scrambling to gather his displaced nuclear family members with the other.

Married But Still Looking is a fast and appealing read, thanks in part to the authentic characterization of Genesis, who is like every man and no man, all at once. He articulates the thoughts you've heard uttered a million times by your brother/father/cousin/husband/ homeboy/favorite MC. Yet his behavior is unlike anything you'd care to associate with the men in your life. His struggle is genuine and familiar, and yet his actions are unpredictable.

Ironically, Genesis, who seems incapable of fidelity to the lady in his life, possesses a fierce loyalty to his best friend Prodigy Banks. In a shrewd and entertaining move, author Hunter revisits Prodigy, the reformed, loose-zipper from his first novel, The Hearts of Men. Prodigy is a welcome and fresh presence for Hunter avoids a remix by picking up his life almost where The Hearts of Men left off. The two men share a beautifully intense friendship that exudes true brotherly love sans the sap. Their introspective and emotional interactions validate Travis Hunter's voice (and his commitment to portraying honest black male characters free of cardboard cutout caricatures) as an important contributor to the new wave of novelists.

However when Hunter tells the female side of the story that Married But Still Looking stalls. His dialogue for his female characters is straight out of the BAP Handbook, and does little to enliven an already flimsy female supporting cast.

In Married But Still Looking Travis Hunter convincingly "pen-lashes" the proverbial sophomore jinx with this fresh and engaging page-turner. He shines as a writer with his use of dead-on macho posturing to breathe life into his male characters, and his straight-to-the-point narration. He wastes no energy on conceiving ambitious lyrical imagery and settings, and he doesn't need it. All you need to know about Travis Hunter's Atlanta is that women drastically outnumber men. Hunter wraps up his novel with a fitting climax that leaves each character examining exactly what they have been looking for.