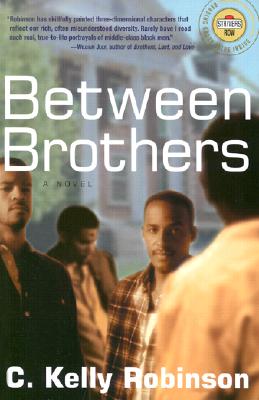 Read a Description of Between Brothers: A Novel (Strivers Row)

C. Kelly Robinson has combined the elements of a successful television drama, violence, suspense, and relationships in his novel, "Between Brothers" with an equally entertaining result. "Between Brothers" is a suspenseful story about four young black brothers coming of age in an urban community. The novel centers on four young, black men attempting to save the Ellis Community Center from financial ruin. Attending a Historically Black College, Highland University in Washington, D.C., the brothers are intelligent and resourceful, just as the good guys should be, despite a few dents in their armor. The opposition is your typical urban bad guys, a gang leader, a crooked politician and businessman. The two sides clash in dramatic fashion throughout this suspenseful tale.

The brothers are also housemates. Larry "Smooth Operator", a rich, charismatic kid groomed from early age to be a CEO in corporate America. Terrence "Bootstrapper", a brother who has struggled from the mean streets of D.C. in pursuit of his dreams. O.J. Peters "Sinister Minister", a womanizing man of the cloth who can't keep his hands off the female sheep. Brandon "Choirboy", a brother who struggles to maintain his sexual purity while temptation swirls all around him. These brothers end up being caricatures of the young, black, educated, middle class male.

Initially, the adjective laden descriptions of the characters along with the brand names used to describe their clothes, cars, and jewelry became tiresome to read. However, later in the novel when the story shifts away from describing the characters and continues with the plot, saving the community center, I was thankful for the full descriptions of the characters. I am still not sure how I feel about the assumption that I, the reader, will identify with the fashion name brands used so liberally early in the novel. Perhaps, it is just my lack of fashion savvy that has me feeling uncomfortable with the frequent use of fashion name brands in the novel.

Although, the plot which is centered on the Highland boys saving the community center, some interesting views of community leaders emerge in the story. Stereotypical views of the clergy are found throughout the novel. The black church has a long history of producing dynamic leaders in communities across this country. The Ellis community unfortunately has a shortage of such leaders. Instead, the church leaders are like the young womanizer O.J., the Sinister Minister. O.J. is led by his Pastor, a compromising, old dog himself Pastor Grier. Regrettably, this breed exists outside of the pages of novels. The community leaders are not all bad in the novel. Sheryl Gibson, the community center's director is the model urban leader, rising from the D.C. streets herself. Sheryl is a single mother who has overcome hardship in her life as well as in the community center she leads.

Most writers write because they have something that they want to say, whether you want to read it or not. "Between Brothers", according to the author was written to "entertain readers while reminding...how diverse and complex we are." I think this assertion by the author is admirable and certainly "Between Brothers" is entertaining.

Read Villard’s description of Between Brothers: A Novel (Strivers Row).